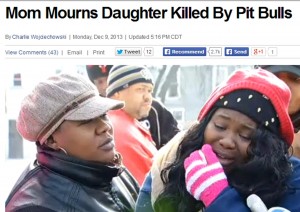 A painful Christmas for family of child killed by dog: ‘I can’t do anything except worry about my baby’

Christmas is still weeks away, but family had already done their shopping for Jah’Niyah White, a South Side child described by a doting grandmother as “the smartest 2-year-old I’ve ever met in my life.”

Her father had plans to honor her Christmas present wish by buying her a bicycle, and her paternal grandmother, Britt Williams-Nelson of south suburban Phoenix, had already purchased a battery-powered toy for her to ride. But the child’s death over the weekend – she was killed by a dog, officials say – has made all that Christmas planning painful.

“She will never ride it now,” Williams-Nelson said of her purchase.

“I’ve been up for the last 48 hours,” she said tearfully when reached by phone at her home. “I can’t sleep.  I can’t eat. I can’t do anything except worry about my baby.”

Authorities are continuing their investigation into the death of the child, who was attacked Saturday afternoon while at her grandfather’s home in the 300 block of East 91st Street in the South Chicago neighborhood. Chicago Police Department News Affairs Officer Jose Estrada said this morning the department’s investigation into the girl’s death is continuing and no arrests or charges have been filed.

The family said both dogs were pit bulls, an adult female dog and her puppy.

“I’m doing OK,” said Jah’Niyah White’s mother Kashairah Gardner, 20, who was reached this morning by telephone at her mother’s home in south suburban Harvey. “I’m hanging in there,” Gardner said.

Jah’Niyah’s father, John White, 21, lives and works in Missouri, but he arrived at his mother’s Phoenix home last Thursday to deliver Christmas presents for his daughter. White is no longer together with his child’s mother, but they remain very good friends, Williams-Nelson said.

White responded in much the same fashion as Gardner when asked how he was feeling today: “Not good.”

Williams-Nelson said her son “can’t stop crying” since the child died and that they were headed to the city’s South Side this morning to place teddy bears on a memorial for the toddler.

“(She was) the smartest 2-year-old I’ve ever met in my life,” Williams-Nelson said. “She talked like a 5 or 6-year-old. Everyone says she can’t be two, she talks too well.

“She knows how to say her ABCs and she knew her full name and how old she was.”

Williams-Nelson and her husband saw and cared for the child often, at least once a week, she said. “We were part of her life as much as her parents were. My husband loved (her) more than life itself,” said Williams-Nelson, who said she had 4,000 photos of the child on her cellphone.

“Jah’Niyah was our life,” said Williams-Nelson, who indicated she was surrounded by a room full of Christmas presents that were supposed to be for the child she called her “Ladybug.”

Kashairah Gardner said she was arranging to give needy children the Christmas toys she purchased for Jah’Niyah. “I’m trying to get everything together,” Gardner said of those preparations.

Jah’Niyah lived with her mother in an apartment in the 1700 block of East 67th Street on the South Side. Before that, they had been living with Gardner’s father.

The child was pronounced dead at 3:40 p.m. Saturday at Jackson Park Hospital, according to the Cook County medical examiner’s office.

An autopsy Sunday determined that she died from multiple injuries she sustained in a dog attack and said a contributing factor was neglect. Her death was ruled a homicide, officials said.

The Illinois Department of Children and Family Services is investigating the girl’s grandfather for allegations of abuse pertaining to the child’s death, according to DCFS spokeswoman Karen Hawkins. The agency has not had prior contact with the family.

According to a police report, the 50-year-old man who called police led officers to the bathroom of his third floor apartment, where Jah’Niyah was lying on the floor on her back with a white towel around her neck. The man, whose relationship to the child was not given in the police report, told officers she was bouncing on a bed when she fell off and struck her head on the corner of a dresser, the report stated.

Officers saw the child’s chest rising and falling, and felt a pulse. Paramedics began rushing her to University of Chicago Comer Children’s Hospital but while on the way there, she “went into defibleration (sp)” and paramedics had to go to the nearest hospital, Jackson Park Hospital, the report said.

A doctor told police that Jah’Niyah had several lacerations and puncture wounds to the back of her head and her neck, and her left ear lobe was missing, the report said.

-Authorities continue to investigate the death of Jah’Niyah White