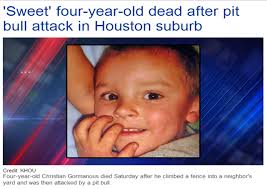 “He was a sweet little boy who liked to dress up as Spider-Man,” said Debra Dreyer, a family friend whose grandson played at Christian’s house. Photographs show a child wearing a superhero costume for Halloween.

On Saturday afternoon, Christian Gormanous’ mother Janell — who’s been caring for a newborn baby — left her four-year-old son in their backyard with his nine-year-old sister. The boy did what boys often do: He climbed the fence and walked into a neighbor’s yard.

Waiting in the neighbor’s backyard was a dangerous dog, a chained pit bull.

The dog attacked the boy who had wandered into the yard, savagely biting him until his sister Trinity came to his rescue.

“Trinity was able to get the dog off of him, brought her little brother back over the fence and went in and got her mother and told her the dog had attacked Christian,” Dreyer said.

So severe were Christian’s injuries, a helicopter carried him to a Houston hospital where he died Saturday evening.

Now his family is in mourning.

“They’re holding up as best as possible,” said Misty Price, one of many family friends who gathered at the home Sunday. “The mother, of course, and father are very distraught. But we’re holding on. We trust in the Lord and we will see it through.”

No one answered the door at the dog owner’s home. On the door hung a notice from a county animal control officer, but law enforcement authorities said they did not expect any criminal charges.

The dog involved in this attack was chained in its yard, authorities say. But neighbors complain that pit bulls sometimes run free in the area.

“I think the ordinances need to be changed to start addressing these more aggressive dogs,” said Karen Loube, the president of the area’s property owners’ association. “I think the county needs to step up and start helping.”

But the family’s friends focused not on the dog, but the child who had died and the family that loved him. The attack was “just something tragic that happened,” Dreyer said.

“Anytime you saw him he was laughing and playing,” Price said. “And he was a sweet, sweet little boy.”

–Pit Bull Kills 4-Year-Old Christian Gormanous After Boy Climbs Fence
-Boy, 4, fatally mauled by his neighbor’s pit bull after he climbed over chain link fence and into the dog’s reach
-More information has been released about the 4-year old boy killed by a chained pit bull.

*The APBT is of medium intelligence, and it is athletic. They have plenty of energy and exuberance for life. They are affectionate companions are often referred to as a “nanny dog”, which leads many families to believe that they are suitable companions for children. Many can live happily with children and never have an issue, but there are many cases of the family pit bull suddenly attacking or killing a child in the household. The Pit Bull advocacy group Bad Rap recently retracted their original “nanny dog” statements (https://www.facebook.com/BADRAP.org/posts/10151460774472399 )13.

In 2013, in the United States, 16 children were killed by Pit Bulls and their mixes. Most of these children were killed by family pet pit bulls that had never been neglected or abused and had always loved the child. As with all breeds, the traits needed for their original tasks remain in the dogs – in this case, the sudden explosive aggression that was necessary to survive in the fighting pit. An APBT may never show this aggression, but if it does there will be no warning and the attack will not be easy to stop. Extreme caution should always be taken when this breed interacts with children. They are fun loving dogs that have “clownish” behaviors. Despite, their many positive qualities, this breed may not be suitable for everyone. Their high energy requires a family that can accommodate and appreciate this aspect of their personality. They usually do best with active families. Many American Pit Bull Terriers get calmer as they age and an older dog may work for a more reserved family.