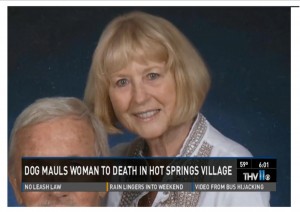 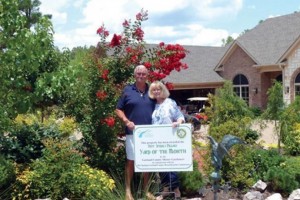 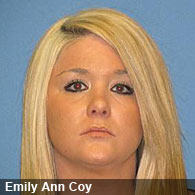 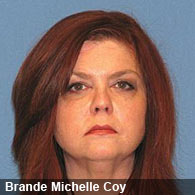 The following information was obtained from the Saline County Arrest Warrants for Brande and Emily Coy:

– At about 7 a.m. on November 21, 2013, Brande Coy released two unleashed dogs into an unsecured yard on Ornado Lane in Hot Springs Village. The dogs were a rat terrier and a bull mastiff/pit bull mix. The bull mastiff/pit bull, named Patrone, belonged to Brande’s daughter, Emily, who was not home at the time.

– Brande told officers that after she let them outside, she went back inside the home, and after some time, heard someone screaming outside. Once she went outside to investigate, she saw Patrone biting a woman in the road in front of the house. Brande tried to stop the attack and was bitten herself. She said it took her about 30 minutes to gain control of Patrone. She then went inside and, at 7:38 a.m., called 911 to report the incident.

– Brande remained in the home – washing her face, hair, and changing clothes – until emergency personnel responded on scene about 16 minutes later.

– The victim, identified as Joan Kappen, was found in a ditch and taken to Mercy Hospital with severe injuries to her legs, hands, arms, and face. She was pronounced dead at the hospital at 9:33 a.m.

– Brande was treated for her injuries.

– Through investigation, authorities learned that Patrone was the littermate of another bull mastiff that killed a 5-year-old child earlier in the year in Jessieville. There were nine dogs as a part of that litter; authorities have not been able to locate the other seven.

– While being questioned, Emily told investigators that Patrone would “bite out of fear” if it became afraid.

– On Dec. 3, 2013, a woman approached Hot Springs Village police and said that she had also been bitten in the face by Patrone. The woman said she used to live near Emily in Jessieville and regularly watched and cared for her dogs. The woman said in July 2012, she reached down to pet Patrone when he bit her in the face. She said that Emily witnessed the bite and helped stop the bleeding, but refused to pay for any medical attention. Emily said the woman had come to her home, yelling and making threats, which is why Patrone acted out of defense.

– On Dec. 5, 2013, a Hot Springs Village police officer provided a statement regarding when he worked with Emily at an area café. He said approximately two years prior, Emily showed up to work with bandages on her arm and leg. According to the officer, Emily told him and other employees that Patrone had bitten her, causing the injuries. When asked about that incident during the current investigation, Emily denied saying Patrone had bitten her and said the bites were from another dog.

– On Dec. 16, 2013, Kappen’s husband, Hans, provided more details about the walk that he and his wife were on. He said they left for their daily walk at the same time, but took different routes each day. He typically walked their two dogs, so he took the easier route with fewer hills. He said the two typically met up at a certain location to finish their walks together. Their walks usually started at 7:30 each morning, but they started earlier on Nov. 21 since Joan was taking a friend to a doctor’s appointment that day. Hans said he had no previous contact with Coy’s dogs nor was he aware of his wife having previous contact with them. Joan was on the same route she took each day; Hans did not witness the attack.

As a result of the investigation, arrest warrants were issued for Emily and Brande Coy for the following reason:

“Both Brande and Emily Coy knew or had reason to know that the bull mastiff/pit bull mix breed dog [Patrone] had a propensity to attack, cause injury, or endanger the safety or other persons without provocation. … According to witnesses, the dog had also been allowed out in the public area unsupervised and unsecure on at least one occasion previous to the incident involving Kappen. The action of recklessly allowing the dog out in a public area unsupervised and unsecured contributed to and resulted in the death of Kappen.” 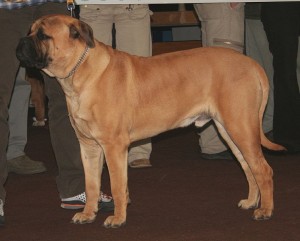 *The Bullmastiff originates from England and is a cross of the English Mastiff and the Olde English Bulldog (this is not the wheezing, waddling Winston Churchill Bulldog, but the original, agile bear-baiting / pit-fighting bulldog). Bull Mastiffs are approximately 60% English Mastiff and 40% Olde English Bulldog and were recognized by the English Kennel Club in 1924. They were not recognized by the American Kennel Club until 1933. It is required that three generations of Mastiff – fighting bulldog mixes be registered as purebreds before a dog could enter to be judged. They were known for size, strength, and loyalty.  The lineage of the Bull Mastiff can be traced back as early as 1795.  These canines were originally bred to be gamekeepers and to guard the estates of their owners. Mastiffs could easily track and hold poachers on the property. They were used to guard diamonds for the “Diamond Society of South Africa”. Today they still used as guard and attack dogs and as companion animals.

*The ‘bull and terrier’ type was originally developed in England in the early 19th century. The lineage goes back to the mastiff / molosser types, including what we now call the Olde English Bulldogge, that were used for bear-, bull- and horse-baiting from the 12th through the 18th century. This isn’t the bear-baiting we think of today, when hunters feed bears in order to bring them out in the open to shoot them. Rather, the bear, bull or horse was confined in a public arena where the mastiff ‘bulldogs’ would slowly tear them apart alive for the public’s amusement1,2,3,4,5.