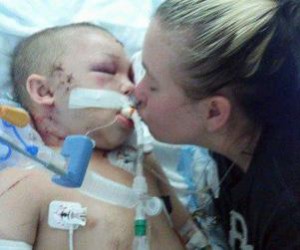 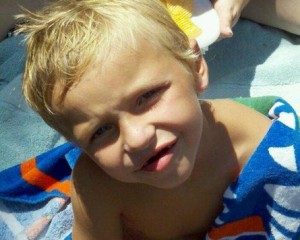 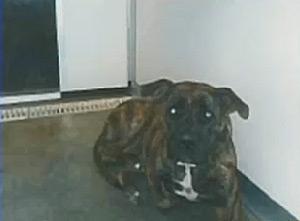 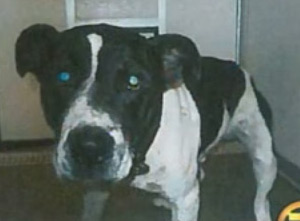 On Tuesday, April 2, seven-year-old Tyler Jett was riding his bicycle home from school when two Pit Bulls–one described as brindle and the other as an Alapha blood bulldog–escaped from their yard, knocked him down, and dragged him off his bike.

Tyler was just yards from his home on Kelly Court in Calaway, Florida, when the Pit Bulls, belonging to a neighbor, Edward Daniels, II, attacked the little boy and savagely mauled him, the Daily Mail reports. Tyler’s family ran to help him when they heard him screaming. They managed to pull the dogs off, but, tragically, the little boy had already been critically injured.

Tyler was rushed to Sacred Heart Children’s Hospital in Pensacola in a coma; he never regained consciousness and died Saturday night in the pediatric intensive care unit, according to News Channel 7. A spokesman for the Sheriff’s Office said the mauling resulted in a punctured carotid artery, which was the cause of death.

The same two Pit Bulls had reportedly been chasing another child before they saw Tyler and attacked him. The dogs also had charged at an elderly man prior to killing the little boy, according to WJHG-TV. In 2012, one of Daniels’ Pit Bulls bit a boy in the face; Daniels surrendered that dog to Bay County Animal Control for euthanization. He also reportedly had seven dogs at the home at the time of the attack on Tyler.

Edward Daniels, II, was charged with tampering with evidence after he washed Tyler’s blood off his dogs’ faces and paws. He claims he thought the dogs had killed an animal. Police also found evidence of marijuana and drug paraphernalia at his home and charged Daniels with drug possession. The Bay County Sheriff’s Office added a charge of felony manslaughter after the death of Tyler Jett, the Daily Mail reports.

If found guilty of manslaughter, a first-degree felony, Daniels could be sentenced to a maximum of 30 years in prison for the death of a minor. A fundraiser held Saturday morning at a local Kia dealer to help cover Tyler’s medical expenses raised $12,000. The money will now be used to pay for his funeral.

*The lovers of blood ‘sports’ turned to dogfighting to satisfy their fancy, breeding the large, mastiff-type bulldogs to smaller working terriers to get dogs both smaller and more agile, easier to keep and to hide, but just as willing to attack and fight to the death. With the rise of the kennel clubs and the desire to distinguish dogs by looks and pedigree as well as by performance, this ‘bull and terrier’ type eventually divided into many official breeds. They all share the same ancestry and function, distinguishing themselves mostly by slight differences in appearance.