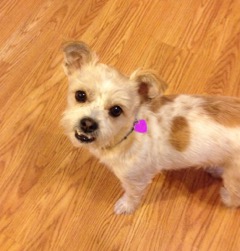 We had decided to walk across a high school’s empty football field to get back to the car, after taking our two terriers for a walk through the forest. Little did we realize what was awaiting our little group of four when we emerged from the trees. When we were about 20 feet into the field, and still about 500 feet from the car, an unleashed, unmuzzled pit bull came tearing across the field at top speed, making a beeline for our little dogs. I thought – ‘Is it coming over to play with them?’ In about a second the growling started, and I realized no, it was not. It grabbed our little Mischa by her neck, and tried to shake her as my fiancé flew into action, grabbing the thing by its neck and hauling it up into the air. I froze in terror, unsure of whether the pit was going to attack my fiancé as well. Mischa’s cries rang out across the field, and tears sprang to my eyes, as I realized that I was, horrifyingly, reliving what had happened once already, fourteen years ago.  A terrifying memory of my dear old Beagle Buttercup being lifted up by the neck by a pit bull flashed in front of my eyes. How could I have been so foolish as to think that a pit bull would run over towards a dog like that to play? It certainly didn’t want to play last time.

Fourteen years ago I had been unsuspectingly walking my senior beagle down a busy city street. Suddenly an unleashed, unmuzzled pit bull came racing towards us, and grabbed my sweet old dog by her neck. Buttercup made a pitiable cry, and the owner, who had lost her grip on the dog while trying to put its leash on, ran over to try to stop it. Little did I realize at the time that this was not the first time this had happened, nor the second. This unprovoked attack on another person’s pet was happening for the eleventh time. Somehow the owner managed to get her pit bull off of my beagle, and I wept and collected my dog.

Both of my dogs lived. Buttercup received stitches, Mischa received staples. We were lucky, and I thank God. If it hadn’t been for my fiance’s adroit wrestling of the pit bull that attacked in the field, Mischa might not have made it. Who knows what would have happened to our other terrier.

Now I can’t go back to that park without feeling fear. I’m terrified if I see a pit bull on the street. I’m always looking over my shoulder now when I’m walking the dogs. What happened to my peace? 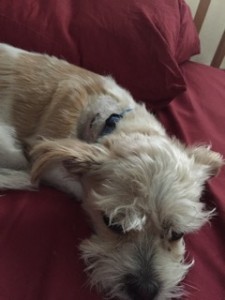 It has been stolen by the extraordinarily selfish behavior of a group of people who seem to think that their interest in a particular hobby – raising pit bulls – is more valuable than public safety. Apparently, it’s more important for them to pursue their interest in the kind of dog that can kill other people’s pets or even other people – than for others to be able to walk their dogs in safety. I’ve now suffered through two traumatizing dog attacks in my life, and both by the same breed. It’s terrifying. It’s not a “mislabeling”, as pit bull advocates are so fond of saying. It’s not “a coincidence.” It’s not “bad ownership”. What it is, is a dangerous, unpredictably vicious breed of dog that desperately requires a ban.

I’m furious that this incredibly dangerous dog is mostly unregulated in the US.

Here’s an article about the success of pit bull bans in Toronto, the city where I live: http://www.thestar.com/news/gta/2014/10/03/pit_bulls_were_torontos_biggest_biters_before_the_ban.html

Only 13 bites last year due to legislation requiring muzzles and neutering! The ban has been in effect for 10 years, and it’s clearly working.

Please write to your local politicians, wherever you are, and urge them to maintain, implement or reinstate your area’s ban on pit bulls. Mischa, Buttercup and countless other family pets will thank you.

The American Pit Bull Terrier has a history and bloodline deep rooted in the blood sports of animal baiting and dogfighting. As with all breeds, they retain their original traits. They

often to do not accept other animals, especially dogs, and can be extremely aggressive towards them. They may accept animals they are raised with, but have been known to kill other family pets even after years of living together happily.