An 83-year-old man has been mauled to death by a pack of four dogs near his home in Florida. 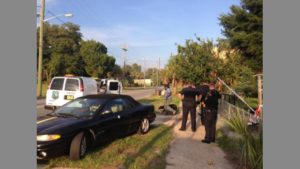 Michael Downing was killed by his neighbour’s dogs near his home in Jacksonville at around 4pm on Friday, according to officials.

Neighbours discovered Mr Downing’s body by a set of bins next to his and the dog owner’s homes. He had been dismembered and was barely recognisable, WFTV9 reports.

“By far it’s probably the worst things I’ve ever seen in my life,” Mackenzie Partin told the broadcaster. “There was only 30 per cent left of his body.”

It is thought Mr Downing may have been dragged into the yard by the animals from the other side of their fence, while other neighbours claim to have witnessed the dogs slipping through holes in the fence on previous occasions.

One neighbour told the Florida Times Unionthat the dogs had treated Mr Downing like a “rag doll”. The four animals, identified as a Rottweiler, and three dogs of mixed breeds of German shepherd, Rottweiler and chow chow, had torn off the man’s legs and ripped flesh from his arms and head.

Police identified an 83-year-old man who was fatally mauled by four dogs in an attack Friday on Jacksonville’s Eastside, and people who live 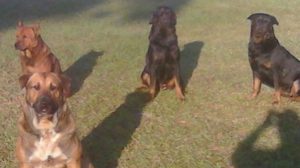 in a nearby apartment complex are hopeful the dogs are gone for good.

Michael Jason Downing, who lived at the Franklin Arms Apartments at 888 Franklin St., was found dead in the backyard of a home in the 1100 block of Jessie Street shortly after 4 p.m.

The owner of the dogs told The Times-Union that he was away from the house at the time of the attack. It was not clear how the dogs got to Downing, though he may have been pulled under a fence, authorities said.

The fence separates the yard and a parking lot for the apartment complex where residents dispose of trash into dumpsters.

Neighbors who live in the apartment complex pointed out holes in the fence Monday and said the dogs were able to slip through from time to time. Some of the holes are now covered by wooden fencing or boards.

The four dogs, aged 3 to 5 years old, include a rottweiler and three that are mixed breeds consisting of German shepherd, rottweiler, and chow chow.

The dogs were seized Friday and are being evaluated by Jacksonville Animal Care and Protective Services.

Owner Lephus Felton, 52, told the newspaper that people who live in the nearby apartments try to agitate his dogs regularly. He said the animals respond to commands, but he was gone for about 30 minutes when the attack occurred. 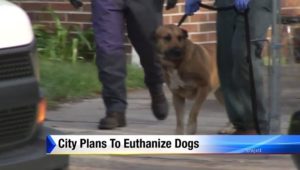 Friends and neighbors said they believe Downing’s death could have been prevented.

Downing’s friends said he was a great person who loved life and helped others with a big smile on his face.

Friends told News4Jax Monday that they’re heartbroken about what happened to him.

“He was a cool guy all the way,” said Randy Hill, a friend of Downing.

Downing was very popular at the Franklin Arms Apartments, where he lived for years. His neighbors, who called him “Mr. Mike” became like family. 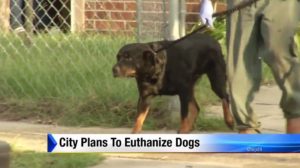 Mackenzie Partin and Eddie Edwards said Downing wasn’t even recognizable after the attack.

“Oh man. That’s a horrible way to go. I couldn’t imagine being mauled to death,” said Edwards, who found Downing’s body. “It don’t look like something you want to see.”

“Not just bit on. He was eaten alive,” Mackenzie Partin said.

Felton said the dogs are trained to protect his home and they would not attack without being provoked.

“He had to be antagonizing my dogs to be pulled under there … even the police say, because he got pulled underneath. So he had to stick his hands under there, so that’s when they grabbed him, I guess,” Felton said. “My dogs ain’t no vicious dogs. They’re vicious to protect this yard. That’s their job. It’s like the police have dogs to protect them, you know? That’s how they’re trained.”

But Downing’s friend, Mark Jones, said he doesn’t believe that the 100-pound man would have put his hand over the fence. Jones also said that the dogs had gotten out before and acted aggressively toward anyone who walked by.

“I knew it was coming. It was just a matter of time,” Jones said. “I am almost 63 years old and I have seen a lot of horrific stuff. And it was terrible, to say the least.”

Neighbors said they’ve complained to the city before and also the dogs’ owner, but nothing has been done.
Crosby said there are an average of 30 to 32 deadly dog attacks each year in the United States.

Felton was served the papers today informing him of the city’s decision to declare the dogs dangerous.

Police and the State Attorney’s Office had no updates on the investigation.

Friends remember him as ‘great person’

JACKSONVILLE, Fla. – A community is remembering a man police said was killed when he was attacked by a pack of dogs in an Eastside 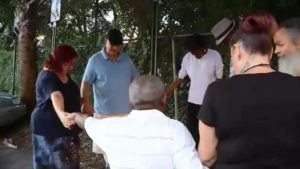 Police were sent to investigate after the body of the 60-year-old man was found Friday afternoon along the fence line of a home on Jessie Street.

On Saturday, friends came together to remember his life. A friend who had known him for about three years said his name was Mike.

“He had no enemies, he always had a smile on his face and he was such a great person,” said a man who asked to be identified only as Mark.

A neighbor said he saw the man right after the brutal attack and called it horrific. The sheriff’s office said four dogs attacked the victim on a property along the Franklin Street apartments.

Police said all four mixed-breed dogs were taken to Animal Care and Protective Services to be evaluated. The sheriff’s office has not released the full name of the victim. 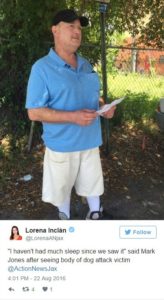 The Florida Times-Union reports 52-year-old Lephus Felton wasn’t home when the attack occurred. A fence separates the apartment complex from the home. On Monday, neighbors pointed out several holes in the fence where they say the dogs slip through.

“By far, it’s probably the worst thing I’ve ever seen in my life,” said Mackenzie Partin. “There was only 30 percent left of his body, probably.”

Another neighbor told the Times-Union that Downing’s legs were ripped off and that the dogs tore flesh from his head and arms.

Rottweilers originate from Germany and are descendants of Mastiff-type dogs, sharing many of the traits and genetics of that canine lineage.  Most likely the Italian Mastiff was spread by the Roman legion as the army invaded Europe around AD 70. Rottweilers are one of the oldest

herding and guard dogs and are thought to be descendants of ancient Roman drover dogs. They performed as excellent herders due to their eagerness to control and intimidate cattle. They were once referred to as “Rottweiler butchers’ dogs” because they often pulled carts with butchered meat to market in “Rottweiler”, which was a popular and important trade center. The Rottweiler population dramatically decreased when the railroads were built and the need for them diminished.  By WWI and WWI, the need for the Rottweiler increased due to their use as messengers, watchdogs, and guard dogs.

Learn more about the Rottweiler