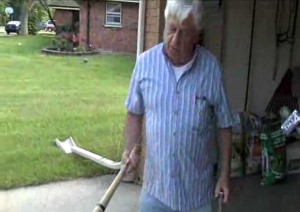 Hero neighbor, Dennis Williams, rushed to action, first with a baseball bat, and then with a gun. He fired the weapon, killing one of the Pitt Bulls. The other dogs then backed-away.

WASHINGTON COUNTY – A man was severely injured in a gruesome dog attack in Washington County.  It was a stranger who jumped in to help save his life.

The victim was walking his dog when three Pit Bulls escaped from a backyard and charged at him.

Dennis Williams lives nearby, and heard the screams for help. He looked out his window and saw the vicious attack.

Williams rushed to action, first with a baseball bat, and then with a gun. He fired the weapon, killing one of the Pitt Bulls. The other dogs then backed-away.

“I will never forget seeing that attack, or hearing the screams,” Williams says. “It was one of the worst things I’ve ever witnessed. The dogs were on top of the man and his dog. They were not going to stop. I first tried hitting the Pit Bulls with a baseball bat, but they wouldn’t relent. There was blood all over the ground.”

None of the Pit Bulls had licenses, and only two of them were current on rabies vaccinations. They are currently being quarantined. Today’s TMJ4 tried getting in touch with the owner of those dogs.