Billboard Campaign is First Ever to Highlight Fatal Dog Attacks 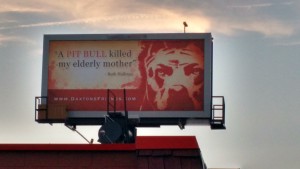 (Downtown Milwaukee, WI) – An arresting image … angry eyes, cropped ears, and thick, heavy jowls … glares from the blood-red background. It’s the unmistakable stare of a beast that means harm. Below this portrait of dread, the words: “A PIT BULL killed my elderly mother.” And signed — Ruth Halleran

Ruth’s mother, Betty Todd, was the first fatal dog attack victim in 2013, a year when 32 people in the U.S. died from dog maulings. The pit bull was a family member and Betty, 65, was babysitting her grand-kids when the dog killed her. Her tragic story is repeated year after year in an annually increasing number of severe and fatal attacks.

The billboards and bus shelter signs are the first of their kind anywhere in the world, and their purpose is to provoke thought and debate. Daxton’s Friends for Canine Education and Awareness sponsored the billboards through donations, in the hope that people will contact the organization for information about dog breeds and safety. Daxton’s Friends, a non-profit educational organization, was formed in 2013 after founder Jeff Borchardt’s 14 month old son, Daxton, was killed by two pet pit bulls in the home of a friend.

Jeff Borchardt says “We tell the truth about pit bulls and other fighting breeds and provide honest information about all dog breeds so that families can make a better decision than we did.” He also supports restrictions on pit bulls, such as mandatory spaying and neutering, specialized confinement measures and liability insurance.

Borchardt once believed what he’d heard repeated as a sort of common knowledge: that no breed of dog is born any more dangerous than another. He now says the general public is being told “a very dangerous set of myths” by animal shelters and “rescue” organizations whose goal is to place millions of cast-off pit bulls and other dangerous dog breeds into the homes of average families. “Pit bulls were developed to be professional fighters: to grip, to shake, to do as much damage as possible in a short period of time,” Borchardt says. “Though many will never attack, there is no way to predict which ones will. And when they do, the results are devastating.”

Pit bulls are responsible for more than two-thirds of all mauling deaths year after year; more than all other breeds combined, although they comprise only six percent of the U.S. dog population. A significant number of the dogs that killed passed “temperament tests” and had never shown signs of aggression before they mauled someone. 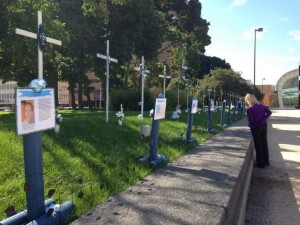 The state capital in Columbus may be a hotspot of controversy tomorrow, May 30, beginning at 9:00 a.m., when volunteers for Daxton’s Friends for Canine Education & Awareness unveil an art exhibit depicting more than 40 U.S. victims of fatal dog attacks within the past 17 months. The majority of the lethal dogs were pit bulls. Midday, a pro-pit bull group plans a rally to promote its own cause – ending “breed specific legislation” (BSL) in Ohio and wiping out communities’ right to home rule and public safety regarding known dangerous dog breeds. Ohio has been the location of several fatal and disfiguring pit bull attacks, and more than 70 Ohio municipalities currently restrict their ownership.

Ohio towns would no longer be permitted to restrict dog breeds known to inflict fatal or maiming injuries if an anti-BSL law is passed, as has happened in several states. Concerned Ohio residents and victims’ rights advocates from other states joined efforts to bring “Out of the Blue” to Ohio in order to separate fact from propaganda.

“It’s time for people to start being honest about pit bull type dogs,” says Jeff Borchardt, a founder of the non-profit education group DaxtonsFriends.com and father of one of the victims, 14-month old Daxton. “I was led to believe, through widespread media and lobbying campaigns, that pit bulls are no more dangerous than other dogs. My son is now dead because of that deception.” Borchardt believes that the general public is being told “a very dangerous set of myths” by animal shelters and “rescue” organizations whose only goal is to place pit bulls into the homes of average families. “When a pit bull attacks, it isn’t comparable to a Beagle, or a Chihuahua, or even a Doberman or German shepherd bite,” Borchardt says. “Those breeds usually bite once and release. Pit bulls were bred to grip and hold on, to shake, to do as much damage as possible in a short period of time. Their purpose is to fight other dogs to the death.”

Last year, when “Out of the Blue” made its debut appearance in a Grand Rapids, Michigan Art Prize exhibition, pit bull owners arrived with their dogs in an attempt to block visitors’ access to the showing.

Volunteers want visitors to the exhibit to see the faces of those who died as a result of a dog attack, and to understand the differences in various dog breeds. Contrary to what people hear, it is definitely not “all in how you raise them,” says Borchardt. “Many of the dogs that killed the people featured in this exhibit were well-raised, friendly dogs with no prior aggression. Their fatal attacks were literally without warning; completely out of the blue.”

Borchardt explains that just as pointers are likely to point, shepherds to herd, and Labs to swim, pit bulls are much more likely than non fighting-breed dogs to seriously injure or kill. They are responsible for more than two-thirds of all mauling deaths year after year; more than all other breeds combined.

And the numbers are rising, Borchardt says, as well-funded animal “rescue” groups push these dogs into communities where the average person doesn’t know the truth. “We’re bringing them the truth.” 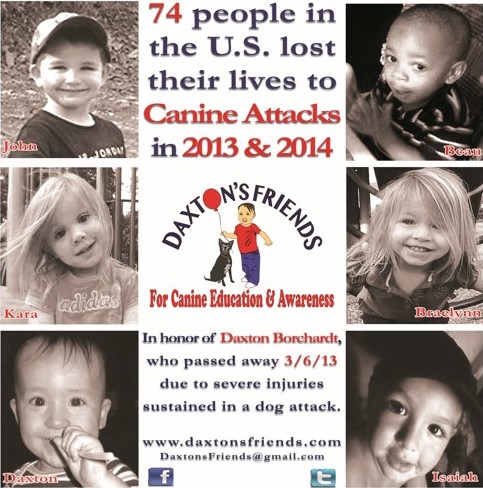 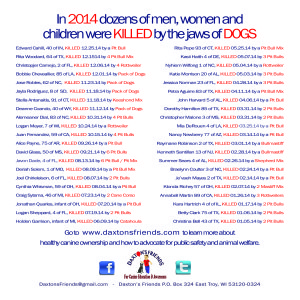 Beginning a Tradition of Bringing Information and Knowledge to Families and Communities around the US. 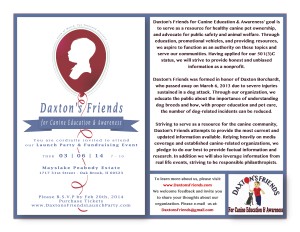 OAK BROOK, IL – As many of you know, we have started a non-profit organization to help further canine education and pet safety.  To mark the one-year anniversary of 14-month old Daxton James Borchardt’s death as a result of canine related injuries, Daxton’s Friends for Canine Education & Awareness will honor his life and legacy with this gathering.

Please plan on joining us for an enjoyable evening of cocktails and hors d’oeuvres at the Mayslake Peabody Estate, 11717 31st Street, Oak Brook, Il 60523 from 7-10 PM on Thursday, March 6, 2014.  This gathering will also serve as a platform to share our plans to support communities and raise funds to promote our mission. We are dedicated to bringing knowledge and awareness to the public about the importance of knowing dog breeds and their relationships to humans, as well as issues of safety regarding their care, maintenance, and selection.  We aim to serve as a resource for healthy pet ownership, and to advocate for public safety related to canines. Having applied for our 501(c)(3) status, we are excited to be commencing our preparations for our Launch Party and Fundraising Event next month.  With an ambitious goal of hosting over 50 guests, public officials, and representatives from the media, we are excited to be able to share information about our mission and future plans.

Again, we deeply appreciate your support and want to thank you in advance for your participation and support of our organization. This first inaugural event is critical step in building momentum for the plans ahead. As a volunteer-run organization, all expenses must be offset through our various fundraising endeavors so we may continue our mission. We hope that you will attend this event. Please learn more about us on our website: www.DaxtonsFriends.com. If you have any questions, would like to attend the event, or would like to learn more about Daxton’s Friends please contact us at [email protected].

Both Sam Madan and Jeff Borchardt (Board members for the organization) are working hard with members of the Daxton’s Friends to ensure that the kickoff event is a successful one. “The launch party is an essential component of our fundraising efforts, and we are very grateful to Tony Solesky, Dennis Baker, Ruth Halleran, Susan Iwicki, Beth Robbins, and Sharon Yildiz, as well as all of our Daxton’s Friends members for generously volunteering their time to help create a memorable evening.” said Jeff Borchardt, father of Daxton and founder of the organization.

One thought on “News Releases”