Aggression Due to Medical Problems
Occasionally, aggression in dogs can be the result of a medical issue. Dogs with certain injuries, medical conditions or diseases can develop aggression issues. An example is hypothyroidism, a common hormonal imbalance in both dogs and humans. In humans, hypothyroidism may cause weight gain and depression, while in dogs, the first obvious sign may be heightened aggression. A veterinary exam followed by corrective medical treatment can sometimes result in improved behavior.

Genetic Predisposition
Dogs from particular breeds and/or bloodlines can be predisposed to aggression. All dog breeds originated for a purpose, and there are certain breeds that have aggression built into their genetics. Some small terrier breeds are known for being dog-aggressive, while some hunting breeds display predatory aggression towards small animals like birds or rabbits. Guarding and dog-fighting breeds can be predisposed for aggression toward both people and other dogs, and many dogs in these categories are large enough to cause severe injuries or death to people and animals. Fighting breeds are bred to have a “grip & shake” fighting style and can inflict extreme damage quicker than other breeds. 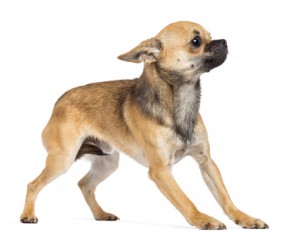 Fear-Motivated Aggression
Dogs that are fearful of their own safety can pose a bite risk.  The threat is from the dog’s perspective and can be real or imagined. Fear aggression can be triggered by such things as the arrival of a bearded male stranger, or by the owner doing something “scary and inescapable” such as restraining the dog in order to clip its toenails. These dogs do not seek out situations to be aggressive in and will try to avoid the perceived danger.

Protective Aggression
This most commonly happens when a mother is protecting her pups, and may be directed towards humans and other dogs.

Territorial Aggression
Dogs may guard their home, yards, and space. They may view visitors, such as neighbors, delivery people, or other animals, as a threat. They will sometimes lunge at the “invader” or bark at the invader from a front window or from inside a fenced yard. This type of aggression is commonly seen in breeds that originated to guard farms and livestock.

Resource Guarding
This is the dog’s attempt to control and guard resources such as food, toys, treats, rawhides, or even the owner. A resource guarder may stand near its owner or a bowl of food and growl at anyone—human or non-human–who tries to approach.

Predatory Aggression
This type of aggression is driven by an animal’s desire to hunt for food.  This is often referred to as “prey drive” and can be seen when dogs are chasing smaller dogs, cats, small animals, or wildlife. There are some unanswered questions about this type of aggression since dogs are considered scavengers and most dogs do not consume the prey items they have killed.

Frustration/Redirection Aggression
When a dog is frustrated and cannot do what it wants, it may attack the nearest person or pet. This can happen when a dog is frustrated about being restrained. For instance an indoor dog may glimpse another dog walking by outdoors, or hear someone knocking at the door. Not being able to reach the real target (the dog or the person knocking), the dog may instead lash out at a nearby dog, cat or person.

Pain-Induced Aggression
Even normally-gentle animals can become aggressive when in pain, and can attack the person trying to help them.  It is advised to be very cautious around a dog in pain. Owners are often bitten while attempting to help their own dogs. This particular issue usually dissipates as soon as the crisis is resolved.

Social Aggression
Dogs naturally live in packs, including both other dogs and humans. Most dogs find their place in the family hierarchy without ever resorting to aggression. In fact, dogs who have true leadership skills are often the most benevolent and laid back animals in the household. Real “kings and queens” of the pack can spend an entire lifetime in control without a single growl or fight. Unfortunately, the truly weak dogs in the family may resort to growling and starting fights in an attempt to bully their way up the hierarchy. Social aggression can occur in either sex, and in both intact and neutered dogs. Social aggression tends to be most serious and long-term between two females than either of the other combinations.

Unpredictable Aggression
Some dogs may have aggression that does not occur on a consistent or predictable basis. There may be no reason or trigger for the aggression. Some dogs are simply not “wired” correctly. Many fighting breeds have been purposely bred for hundreds of years NOT to give any signal or prior warning prior to launching an attack. Many dogs of these breeds can have a high tolerance for annoyance, but a sub-set eventually reach a breaking point and lash out with no warning. Every week, another owner sobs that their dog had “never shown a sign of aggression in its life” until it mauled a child, visitor, or the owner himself/herself.

7 thoughts on “Types of Dog Aggression”