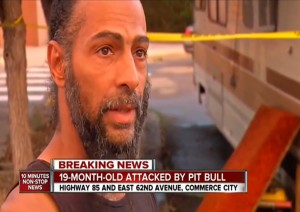 Dog dies after being caught by animal control

COMMERCE CITY, Colo. – A toddler was bitten and seriously injured after he was mauled by a pit bull Sunday evening.

The incident happened at approximately 7:30 p.m., in Commerce City,  just off U.S. Highway 85 and 62nd Avenue.

When police arrived, they found a 19-month-old boy had been severely bitten by a large, 90-pound pit bull.  The dog had been tethered to a pole, and when the child attempted to hug the dog, it attacked the boy, police said.

The child was among a group of individuals traveling across the country.  The group had set up a small camp in the parking lot to the south of the King Soopers.  The pitbull and its owner were also staying in the same location, but were not known to the other group.

The boy was rushed to Children’s Hospital with serious injuries.

Witnesses also described the dog as a pit bull.  Commerce City does have a vicious dog ordinance that bans pit pulls.