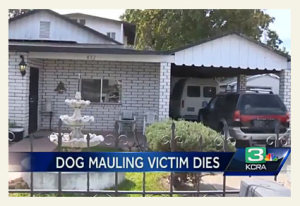 MODESTO, Calif. (KCRA) —A man who was mauled along with his 77-year-old mother by four pit bulls at a southwest Modesto home has died.

Stanislaus County Sheriff Adam Christianson said the dogs were owned by the victims’ neighbors and got into the victims’ yard by digging a hole under a common fence.

An elderly man and woman were mauled and left in critical condition by a pack of pit bulls Tuesday evening in Modesto, officials said.

Deputies shot and killed two of the dogs and the other two fled to a neighboring backyard. The victim was rushed to a waiting ambulance and officers searched the house, where they found an elderly woman, who had also been attacked by the dogs and was suffering from critical injuries, Christianson said.

OUR VIEW: Pit bulls can be deadly; hold owners accountable 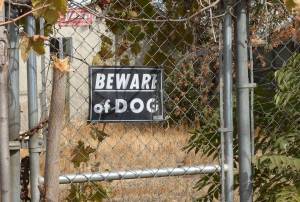 A Beware of Dog sign posted from the alley a few houses East of the home where a man died from wounds when mauled by a pack of pit bulls and a woman critically injured, Tuesday night, Oct. 14, 2014. THE MODESTO BEE

If the law makes it difficult to bring charges, then we must change the law

A full-grown pit bull weighs around 75 pounds. With four of them you get 300 pounds of muscle, jaws and teeth perfect for tearing into flesh.

Against 300 pounds of pit bull, the two people attacked in their own yard on Oct. 14 – an elderly woman and her middle-aged son – never had a chance. That the woman survived was miraculous. Her son wasn’t so lucky.

But was it criminal? We think it was, and we believe charges should be brought against the animals’ owners. Though it’s legal to own four dogs, anyone who owns four potential killers must know the constant threat.

“Four pit bulls equal danger,” said attorney Kenneth M. Phillips, the leading California attorney in dog-bite cases. “When you have a dangerous condition, you have to take steps to correct it.”

More than two weeks after the attack, no criminal charges have been brought.

Though outraged, Sheriff Adam Christianson says he’s not sure the owners can be successfully prosecuted. Unless the homeowner was negligent in letting the dogs escape; unless the dogs were documented nuisances or dangerous; unless they were intentionally made vicious, Christianson says it will be hard to bring charges.

Humans have been altering canine characteristics since before the dawn of history. We breed dogs to have long hair, big eyes, to fit into teacups. Some we have bred to be ferocious. So these pit bulls did exactly what eons of breeding required them to do. They became vicious.
Read more here: http://www.modbee.com/opinion/editorials/article3499964.html#storylink=cpy
——————————————————————————————————————————

Survivor Recounts Attack
UPDATE 11/04/14: Maria Fernandez, 77, was initially treated in an intensive care unit for multiple traumatic injuries after four pit bulls belonging to her next-door neighbor viciously attacked her and her son. Maria is now recovering at Evergreen Nursing and Rehabilitation Care. Among other injuries, both of her hands were broken during the attack and her right leg was broken below the knee. Her son, Juan Fernandez, 54, suffered so many critical injuries that he did not survive.