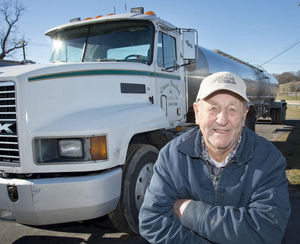 Police say an 87-year-old Maryland man was mauled to death by his family pit bull while taking down his Christmas tree.

The attack was reported just before 2:30 p.m. Wednesday at Eugene W. Smith’s home on Stonehouse Road in Frederick. Deputies say Smith was in the pricess of taking down a Christmas tree when his family’s 84-pound pit bull attacked him.

Smith was seriously injured in the mauling and hospitalized. He later succumbed to his injuries.

At 85, Eugene “Smitty” Smith still drives an 18-wheel tractor-trailer truck, picking up milk from area farms and delivering to creameries for Clouse Co. in Frederick.

He has been driving for 56 years, and intends to continue as long as he has good health.

“I do it because I like the exercise, and I like to get out and socialize with the farmers,” Smitty said.

Smitty began delivering milk when it was transported in cans. The farmers would fill the cans with milk and he would haul them to the dairy, unload them and bring the cans back the next day.

Today, farmers use pipelines to dump the milk into trucks, and several farmers use robots to milk cows, Smitty said.

The job has taken him to a lot of places, including Wisconsin, North Carolina and Ohio, and he has clocked at least 1 1/2 million miles on the truck he’s driving, Smitty said.

“There’s many a night I haven’t been home,” Smitty said, tearing up as he recalled not seeing his two sons, Rick and Jeff, often enough. They were asleep when he came home late at night and asleep when he left early the next day.

“I tell you the truth, it’s a rough life hauling milk,” Smitty said. “You leave in the morning, and you never know if you’ll break down.”

Some routes are easier than others. You make eight or 10 stops on some routes, others require only one or two, and it’s in all kinds of weather, he said. Combine that with inconsiderate motorists who cut you off without warning, driving a big truck can be challenging, Smitty said.

“He’s always had that kind of work ethic, working seven days a week, and he handles that truck just as good today as he did many years.

“But he can be a handful. He’s not afraid to speak his mind.”

Eugene “Smittie” Smith told co-workers at Clouse trucking that he often slept with the 84-lb neutered male pit bull that ended up mauling him to death Wednesday in his home while he an his son’s fiance were taking down Christmas ornaments.

Shocked co-workers said Smith was known for always having a pocketful of treats for any animal he met.

The four-year old dog was adopted by Smith and his son from a rescue organization in May. Officials are still looking into the dog’s background. The animal was euthanized after the deadly attack.

Officials have no history of complaints about the dog from neighbors.

Attacked While Taking Down His Christmas Tree

The Frederick News-Post published a video today as well with Deputy First Class Amanda Hatcher detailing the dog attack and police response. Hatcher states that when police and animal control officers arrived on scene — they arrived at the same time — the dog was still attacking Smith inside the home. Officers were able to disengage the dog from Smith and quickly contain the animal. Smith was taken to Frederick Memorial Hospital with severe injuries where he died.

The News-Post has a recent history of being “extremely” pit bull apologetic. The News-Post, however, is hardly alone in Maryland. Many other state media outlets also swooned, cooed and knelt down for “pit bull kisses” after the landmark 2012 Maryland Court of Appeals ruling, Tracey v. Solesky, that declared pit bulls “inherently dangerous.” The News-Post called the Court’s ruling “narrow-minded” and “shortsighted” and “an ill-thought-out precedent” among other falsehoods.

Now an animal loving elderly man is dead, horrifically mauled to death in an unprovoked attack by an adopted pit bull rescue that formerly slept in his bed. The failure of the News-Post, who never bothered to interview the Solesky family or their attorney or to grasp the depth of the Court’s ruling pertaining to actual Maryland “precedent,” is now party to this man’s preventable death. Smith clearly believed the false mantra that only “mistreatment or intentional training” creates a killer.1