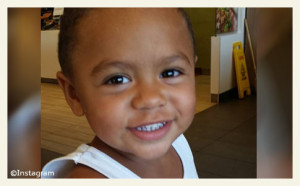 BAKER HEIGHTS, W.Va. — A 2-year-old boy died Monday after he was attacked by a neighbor’s boxer-mix dog on Charles Town Road in Baker Heights, according to the Berkeley County Sheriff’s Department.

The boy was found unresponsive near the dog on Monday at about 5 p.m. in the neighbor’s yard southeast of Martinsburg, a sheriff’s department news release said.

The owner of the dog found the boy, the sheriff’s department said.

The boy was taken to Berkeley County Medical Center in Martinsburg, W.Va., and later was flown to another medical facility, the department said.

Johnson said he did not know where the boy was flown or what type of injuries he sustained. He also did not have the boy’s name, and had not confirmed the name of the dog’s owner.

MARTINSBURG – A two-year-old boy died after suffering severe injuries from a dog attack Monday evening in the area of Baker Heights.

MARTINSBURG – There is no official plan yet to euthanize the dog that attacked and killed a two-year-old boy Monday evening, according to Lt. Willie Johnson with the Berkeley County Sheriff’s Department.

No criminal charges in dog-attack death of 2-year-old W.Va. boy 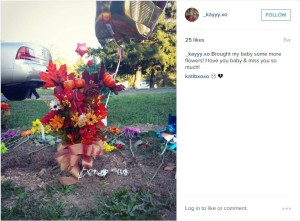 MARTINSBURG, W.Va. — Criminal charges will not be filed in the Sept. 28 death of a 2-year-old boy who died after being bitten by a neighbor’s boxer-mix dog in Baker Heights, according to Berkeley County Prosecuting Attorney Pamela Games-Neely.

“It’s just a horrible, horrible tragedy on all sides,” Games-Neely said Thursday of evidence that indicates the death of Lemarkus Hicks was accidental and not a mauling case.

The cause and manner of death has yet to be released by the medical examiner’s office in Washington, D.C., but Games-Neely said evidence indicates the child died at Children’s Hospital from a facial bite.

Lemarkus was found unresponsive about 5 p.m. near the dog in the neighbor’s yard off Charles Town Road southeast of Martinsburg, the Berkeley County Sheriff’s Department said.

The dog, which was tied up, has since been euthanized by Berkeley County Animal Control, Games-Neely said.

The dog was voluntarily turned over to the county by its owner due to the child’s death, and no prior incidents involving the dog had been reported, she said.

Games-Neely also said there is no evidence that the dog was encouraged to attack Lemarkus, or that the child antagonized the animal, but she conceded that “nobody knows what happened in that one instant.” 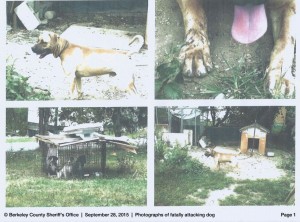 Photographs of Dog
UPDATE 11/30/15: The family of Lamarkus Hicks provided us photographs of the chained dog that killed Lamarkus taken by the Berkeley County Sheriff’s Office after the attack. The dog, named Bubba, was previously described in news reports as a “boxer-mix” and a medium sized brown “mixed-breed.” Our research indicates that Bubba was a buckskin pit bull-mix born on July 1, 2014 with three littermates after the mating of a male pit bull-mix and purebred female pit bull.

We were able to piece together the dog’s lineage by the many public photos on the dog owners’ Facebook pages, Joseph Creamer and Debra Snow. Our PDF about Bubba’s lineage walks readers through the basics and shows that the sire, Bad Butts, a pit bull-mix, is where the mix is from. It is a war dog descendant mastiff-type mix. The dam, Lexi, is a purebred brindle pit bull and appears to have been the only female in the 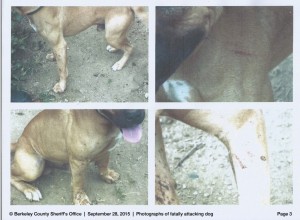 household during the period of the July 2014 litter.1

Our research also indicates that Bubba was just shy of 15-months old when it fatally attacked Lamarkus on September 28, 2015, matching the age provided by its owner after the dog was euthanized on October 14.

After seeing the on scene photographs of Bubba, most will agree with our assessment that the dog is a pit bull-mix. Others may want to review our lineage PDF that contains images of the July 2014 litter, the sire, dam and more. Two days after the death of Lamarkus, Creamer agreed to surrender Bubba for euthanasia and Lexi for adoption at the county pound. There was also a 2015 “crop” of new puppies at that time. Lamarkus’ family believes they were given away to friends.

“In fact, John Paul Scott and John L. Fuller carried out a series of selective breeding experiments at the Jackson Laboratories in Bar Harbor, Maine. “By happy chance, their results revealed a simple rule that seems to work. Their general conclusion was that a mixed breed dog is most likely to act like the breed that it most looks like.”