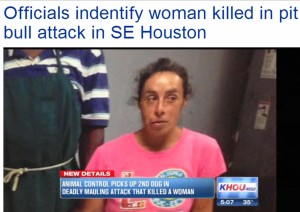 HOUSTON – Authorities have identified the woman Monday killed in a vicious mauling by a pack of pit bull dogs over the weekend in southeast Houston.

According to the Harris County Medical Examiner’s Office, Christina Bell Burleson, 43, died after she and two more people were attacked early Sunday.

Her last known address was at the Servants of Christ United Methodist Church in southeast Houston. That’s because she and her husband are homeless.

Burleson had been a member of the parish for nearly ten years and volunteered for its Crossroads Outreach program for the homeless.

“Christine was a wonderful person. She loved animals. She loved people,” Will Reed, pastor, said. “Always spoke to everyone when she saw them. Here in the community everybody knew her. Well liked and well loved in this community.”

Meantime BARC Animal Shelter has impounded a second dog in the case. This one isn’t believed to be a part of the attack, but the owners have surrendered it.

They also surrendered a second dog, a pit bull mix, which is being quarantined because it was involved in the mauling.

“The owners of the animals have received a number of citations both for the conditions in which the animals were being kept, which were deplorable and for allowing the animals to run at large, for not having their city required pet licenses and for not being current on their vaccinations,” Chris Newport, spokesman for BARC, said.

Homicide detectives with the Houston Police Department have been working with the Harris County District Attorney’s Office to determine whether or not to pursue criminal charges.