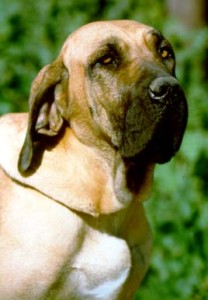 The Fila Brasileiro, also known as the Brazilian Mastiff or Brazilian Molosser, is a large and powerful dog that originated from Brazil, South America. The original Fila descended from fighting molossers brought to South America by the Portugese in the 15th and 16th centuries. They were originally used to intimidate and control the native inhabitants, for attack-hunting large game and as a guard dog. Before slavery was outlawed in Brazil, they were used to chase down runaway slaves, often mauling them to death as an example to other slaves. In later centuries other breeds were mixed in to increase the size and mass of the native Brazilian Filas. The modern Fila is  now descended from several lineages including the English Mastiff, Cuban Bloodhound, pit-fighting bulldog, and the Rafeiro do Alenteio. The Fila is still used in Brazil for bull-baiting and attack-hunting wild boars, and as a guard dog.

The breed is known for its distinctive look displaying a lumbering, massive body, large bones and loose skin. Up to the 1980s, a test was used to decide whether a dog that looked like this really was a Fila. The main criteria besides the look of the dog was whether the dog was willing to be vicious towards strangers:

“The feature that perhaps is at first sight the most apparent in a Fila’s temperament is the “ojeriza” to strangers (ojeriza – sharp aversion). On the contrary to other puppies, a Fila Puppy is not inclined to relaxed playing with anyone. He attaches himself quickly to those with whom he lives but is, however, from his earliest youth suspicious of

persons he does not know. Suspicion may make him irritated and annoyed and to some extent even make him growl with a certain amount of aggression, but yet without sufficient self-confidence to attack. In the course of his development the aversion against strangers will become more and more apparent. Already as a puppy the Fila will clearly show his displeasure if a stranger would try to touch him. At about the age of one year the Fila would attack any person unknown to him who would try to touch him.”

“He does not hide his antipathy towards strangers, on the contrary, he is frankly and honestly aggressive. His features make him the best watch dog one may desire. Of course, his aversion towards persons he does not know demands certain precautions and may bring some disadvantages. A Fila must be under control before guests come into the house. At a show, if the judge would focus on his eyes or would try to touch the dog, he might take the risk of an attack. All this belongs to the personality of the Fila, these reactions are essential to the breed. The first standard, more than 30 years ago, took these personality aspects into account by saying that the dog was not to be punished if he attacked the judge at a show.”1

In 1968, the Fédération Cynologique Internationale recognized the Fila as a candidate breed. In May 1976, the explicit statement that the judge or expert must not touch the dog was removed from the breed standard2. However, the above test was still used to check whether the dogs had the temperament that is desired in the Fila3. The breed standard was again rewritten in 1983, leading to recognition as a ‘breed’ by the FCI in 1984. 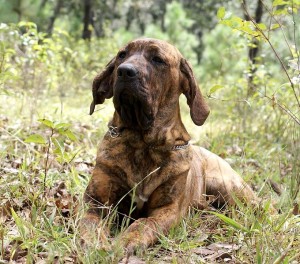 The fans nowadays consider the Fila’s tendency to attack strangers to be a sign of ‘loyalty’ in the breed.  Fans claim the Fila is very affectionate towards its family despite its aggression towards strangers. It should be clear that the Fila will not fit well into our modern urbanized Western societies or our suburban neighborhoods. Though these canines make excellent guard dogs and are always alert to their surroundings and unfamiliar people or intruders, their guardian nature can make them a liability for a family. The fans claim that Filas are good with children they are raised with, but they acknowledge that the dog’s aversion to strangers applies to unfamiliar children as much as to adults.

The Fila Brasileiro often (not always) will be accepting of other household animals if raised with them. They have been known to suddenly attack other dogs they have lived with from their puppy days, with intent to kill. They are notoriously aggressive towards unfamiliar animals, especially dogs. Meetings with other animals (especially dogs) can suddenly escalate into dangerous confrontation. Introductions to other animals should be done cautiously and slowly. The Fila does not belong at dog parks or any other place where other people’s dogs will be off leash.

This breed must have early training. If they do not have a firm and consistent handler, they may become highly dangerous even for their owner. The handler or responsible person must be in control of the dog at all times. Proper socialization may reduce the Fila Brasileiro’s inclination to see threat in normal interactions. Socialization will not make the dog compatible with strangers nor suppress their protective instinct. They will most likely display hostility to anyone that is unfamiliar and the handler must be aware of the possibility of aggressive interaction. Please be aware that the Fila does not always give off signs that it is about to attack.

The Fila Brasileiro often is lazy when indoors. They do like to have daily exercise and regular walks will suffice.  They enjoy having a large yard for roaming and exploration.  As puppies, they require more exercise and stimulation. If they do not receive enough, they may become bored and highly destructive in the home. Puppies should not be over exercised though because it can cause joint and health issues. These dogs are a large-framed breed with long bones that can stress joints during their growth years.  We strongly advise that the owners of these dogs have a properly fenced yard, one that will keep all strangers out including curious children. Fencing must be tall, strong, and secure. They will not tolerate strangers coming near their yard and must be securely confined for public safety. 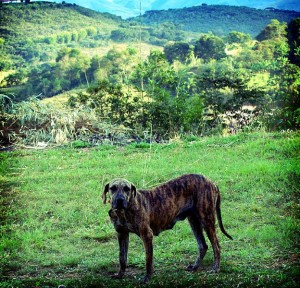 We do not recommend the Fila Brasileiro for families with children of any age. If you have children and choose a Fila, you should impress upon your children that they cannot bring their friends into the home without getting your permission first, so that you can lock the dog away safely. No child, including teenagers, should be allowed to walk the Fila. These dogs need to be under the control of an adult large and heavy enough to restrain them on the leash at all times.

Males stand 25-30 inches at the shoulder and weigh a minimum of 110lbs. Females are slightly smaller.The Fila Brasileiro is an average shedder and needs minimal grooming. Regular brushing will help keep the coat healthy. They do have a tendency to drool heavily after drinking, which can make them a bit messy. Filas can suffer from common health problems that effect most large breed dogs such as hip dysplasia, elbow dysplasia and gastric torsion (bloat). The Fila Brasileiro usually weighs between 90-130 lbs and typically lives 9-11 years.

This breed’s size and penchant for aggression has gotten it banned in many countries, such as the United Kingdom. Many countries have restrictions on breed, such as Australia. It is recommended that potential owners conduct proper research with reputable organizations.  Please make sure this breed is accepted in your community and appropriate for your lifestyle. Be sure to have proper confinement in place before you bring a Fila home as a pet.

In North America from 1982-2015 Fila Brasileiro’s have seriously attacked 5 humans and were responsible for 1 death.