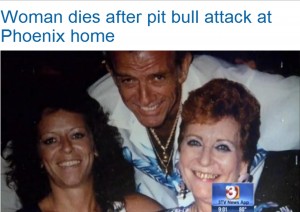 PHOENIX — A woman died after she was attacked by the family pit bull Friday night, according to Maricopa County County Animal Care and Control spokeswoman Melissa Gable.

It occurred at a home near 43rd Avenue and Greenway Road.

Gable said the woman was feeding the pit bull about 8 p.m. when it attacked her.

Nancy Newberry was in the kitchen giving another dog a pill for allergies when Titan, a male pit bull-labrador mix attacked her.

Her husband Dick said Titan bit Nancy in the stomach and on her hand.

Dick said he and his daughter Julie pulled the dogs away and then noticed blood gushing out of Nancy.

Dick said Nancy hunched over, saw her own blood and then fainted.

After that, it was a race against time to get her to the hospital.

They called 911, and Dick put pressure on her wounds.

“I noticed when I picked up her blouse there was a puncture mark in her stomach about right here,” said Newberry. “Well, from this graft that she had put across there from a couple of years ago, I think that works almost like an artery. When that graft got punctured, the blood was really coming out of there. She had totally bled out. They got the heart going for a little bit. They put more blood back in her, but the doctor said ‘I think her heart just wasn’t strong enough to take it, so she just passed and that’s all we could do about it.”

She was taken to John C. Lincoln North Mountain Hospital, where she later died.

Phoenix Police Department spokesman Sgt. Steve Martos said it is unknown whether the woman died from bite wounds or a medical condition. The Maricopa County Medical Examiner had not determined the manner and cause of death as of Saturday afternoon.

*Gable said the 4-year-old male pit bull, which had been neutered, was euthanized at the request of the owner. The woman who died was the mother of the owner.

*Breeds in the Pit Bull family are the most common surrendered and stray dog breeds in the animal sheltering system. They are also the most commonly euthanized dog breed. Owners are often unaware and unprepared for these breeds. While many families own bully breeds successfully and have only positive experiences with the breed, there are families they are not suited for. Because shelters are so full of APBTs and other Pit Bull types, it’s important to neuter your APBT rather than breeding it – for the sake of the APBTs themselves18. No dog lover wants to breed any kind of dog only to have it quickly end up in a shelter after it’s sold!