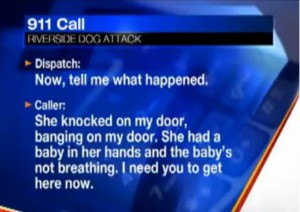 Police in Dayton responded this afternoon to a Riverside Drive home where they say a pit bull attacks and kills a 7-month-old baby.

Officers responded at approximately 12:24 p.m. to the scene in the 2200 block of Riverside.

A neighbor called 911 in a desperate effort to get help.

“She just knocked on my door, bangin’ on my door, She had a baby in her hand. The baby’s not breathing. You need to get here now.,” the neighbor told the dispatcher.

The police supervisor on scene said it’s unclear why it happened, but the baby’s step-grandmother was watching the child for the day and her dog, a pit bull according to police, attacked and killed the baby.

Records at the Montgomery County Animal Resource Center show an American Staffordshire Terrier, which resembles a pit bull, is registered at the address.

The baby is from out of state, according to the Montgomery County coroner’s investigator. The child’s name has not been released pending notification to family members.

The dog was removed by an animal control officer. Homicide detectives were called in to investigate.

Click here to read more about the American Staffordshire Terrier