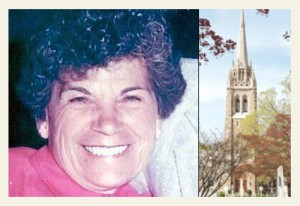 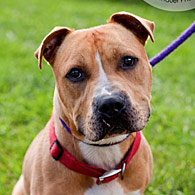 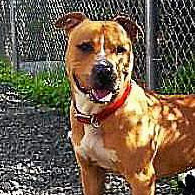 On April 13th, 2014, 93-year old Rita Pepe was attacked while on a walk by a recently adopted pit bull that charged out of its owner’s home. Bill Cronin, one of the several neighbors that came to her rescue, told WTNH.com that, “A large dog emanated from the back of the home, and we thought it was chasing a fire truck.” “Then it made an immediate right turn and took this elderly woman down like a wounded animal.”

A neighbor, Charlie Davis, said the dog owner, 49-year old Matthew Radulski, had only had the dog for a few months. “The owners were usually very diligent. They always had him on a leash; they were always training him,” “From what I know, they actually even hired a professional trainer to work with the dog.” According to Branford police, she sustained “very serious injuries” to her lower left leg and was taken to Yale-New Haven hospital. Captain Geoff Morgan said, “We hope she recovers from this brutal attack, these are very serious injuries.”

Pepe’s son, Charlie Pepe, a North Carolina resident, said he was on the golf course the day of the attack. He said he received a call from his brother informing him their mother was being taken to the hospital.

“You sit there and make a list of why a 93-year-old woman is on her way to the hospital,” he said. “I figured she fell or had a stroke. Never figured it was because of being bitten by a pit bull.”

Pepe said he and his wife and son immediately drove from North Carolina to Branford to be with his mother.

The Branford Eagle obtained two 911 calls Officer Joseph Harrington, who conducted the investigation, said the dog ran from inside the owner’s home and attacked the woman as she was walking. Neighbors tried to fight off the dog using the victim’s cane and a baseball bat. Police reports stated that after the dog owner took the dog for a walk, he walked back inside his house. He reportedly told the police that once he took the leash off of Booker, (the pit bull) the dog ran out the back door. Police state that the dog owner ran after the dog and discovered a group of people standing at the corner of Harbor Street and McKinnel Court, just steps from his house. The group was yelling for help and told the police he saw Booker circling Rita Pepe. He added that he was forced to strike Booker over the head numerous times with a rock in order to get him away from Pepe.  Sgt Richard Dahlin, who supervised the incident, said the victim sustained a massive amount of trauma to her lower left leg. She was taken to a local hospital and underwent surgery, he said.

Charlie Pepe said that while he’s sad over his mother’s death, he also feels bad for the Radulski family.

“It’d be different if someone was raising pit bulls for fighting,” he said. “But this was a different situation. The dog got loose and it’s one of those things you cannot anticipate.”

On May 25th, 2014, 93-year old Rita Pepe succumbed to her injuries and died. According to her obituary she died “peacefully at home.”

What happened to the dog and where did it come from?

The dog accused of attacking 93-year-old Rita Pepe will be euthanized according to a copy of the police department’s incident report.

But the director of the Dan Cosgrove Animal Shelter said the town does not have the authority “to tell anyone that a dog has to be euthanized.”

“The only people who can determine that are the owners or a judge,” shelter Director Laura Burban said in an e-mail. “At this point, we have not heard from the owners as to what their intentions are.”

The incident report identifies the dog as a pit bull named Booker and, according to animal adoption listing, Booker originally had been adopted from the Dan Cosgrove Animal Shelter in September by owner Matthew Radulski.

“He did not show a propensity of violence towards people,” Burban added. “He was well-socialized with different age groups, both men and women. We are uncertain as to what triggered this horrific event but for now, we are focusing on Ms. Pepe’s recovery.”

Booker is being held under quarantine at the shelter.

Burban said state quarantine laws mean nobody is allowed to visit Booker or take photos of the dog from inside his cage. An online adoption search however yielded several photos of the dog.

Burban denied access to take any photographs of the dog, so we did some Googling and found a variety of images of the dog. Several stemmed from a Facebook page (since removed) that you can view here:  PDF file of screen capture. An Adopt-A-Pet advertisement published in the Register was also located and shows that Booker had been misleadingly label a “terrier-mix” 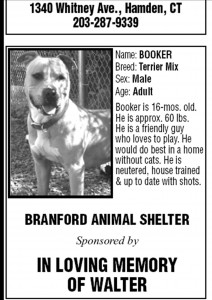 “Booker is 16-months old. He is approx. 60 lbs. He is a friendly dog who loves to play. He would do best in a home without cats. He is neutered, house-trained and up to date with shots.”

The ‘bull and terrier’ type was originally developed in England in the early 19th century. The lineage goes back to the mastiff / molosser types, including what we now call the Olde English Bulldogge, that were used for bear-, bull- and horse-baiting from the 12th through the 18th century. This isn’t the bear-baiting we think of today, when hunters feed bears in order to bring them out in the open to shoot them. Rather, the bear, bull or horse was confined in a public arena where the mastiff ‘bulldogs’ would slowly tear them apart alive for the public’s amusement.