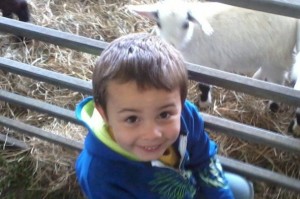 FANNING SPRINGS — The 6-year-old boy had played many times with his family’s two pit bulls, authorities said, but on Thursday morning the two dogs turned on him and killed him outside a Fanning Springs home.

The boy’s name and address, as well as that of his family, were being withheld Thursday pending notification of his mother, said Levy County Sheriff Bobby McCallum, who gave this account:

The boy’s father has custody of the boy, and the boy’s aunt had driven the father to work Thursday morning before taking the youngster back to the home she shared with the boy’s grandfather.

Once there, she let the boy go outside to play, and the two dogs followed him out. The sheriff described this as routine.

Child Dies After Being Attacked By Two Dogs

She let him go outside to play and two of her pit-bull dogs went out shortly after.When she went out to check on him she found him laying unconscious in the driveway.
Deputies say the child had injuries consistent with being attacked by a dog or dogs.
Sheriff Bobby McCallum says the boy had been around the dogs for about a month, so they were familiar with him.
McCallum says one possible theory is that the dogs were fighting or playing with each other and somehow the child tried to separate them and got entangled, but it’s pure speculation at this point.

6 year old Joel Chirieleison was killed August 7th 2014 by two pit bulls in Florida. The immediate family is in dire need of support both emotionally and financially. Please help us raise the funds to pay for little Joel’s final farewell.

The Levy County Sheriff’s Office has released the name of the 6-year-old boy who was attacked and killed by two pit bulls at his aunt’s home just outside of Fanning Springs Thursday.

Meantime, the two dogs involved in the attack were scheduled to be euthanized by Levy County Animal Control Friday afternoon, authorities said.

Joel Chirieleison, the son of Joel Claar and Kristy Chirieleison, had been staying at his aunt’s house while his father was at work.

The 6-year-old’s aunt, Heather Claar, dropped his father off at work Thursday morning and took Joel to her home at 7297 NW 162nd St. to keep an eye on him — an arrangement that had been going on for weeks, said Levy County Sheriff Bobby McCallum.

Heather Claar let Joel outside to play, and her two pit bulls followed. She had owned the dogs for two years and hadn’t had a problem with them prior to the attack, authorities said.

While Claar was inside watching TV, the dogs attacked Joel, sheriff’s authorities said. Joel died on the driveway outside his aunt’s home, authorities added.

On August 7, 2014 at approximately 8:30 AM, Deputies from the Levy County Sheriff’s Office responded to the Fanning Springs area of Levy County to the report of a child being injured by multiple dogs.  When Deputies and Levy County Department of Public Safety personnel arrived they discovered a 6 year old male child deceased.  The child had injuries consistent with being attacked by a dog or dogs.