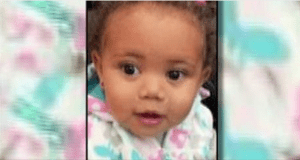 ST. CHARLES COUNTY (KTVI) – A 22-month-old girl is in critical condition after she was attacked by her family`s  dog.
It happened at a St. Charles County home. The little girl is fighting for her life; her grandmother was also seriously hurt as well.

The dog that attacked the child, an 80 pound pit bull mix, has already been euthanized.  The attack happened Thursday night at a home on Essex Street in unincorporated St. Charles County.  Authorities got the call around 6:45pm. 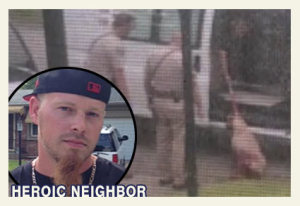 Heroic neighbor stopped the attack by stabbing the pit bull with a steak knife.

The dog had no reported history of attacks or biting, according to police, although the family told police the dog had shown aggressive behavior.

Next-door neighbor Jonathan Banta said the girl’s two brothers came to his home and told him their sister was being attacked by a dog.

“I ran over to the house, and the dog was on top of the little girl, and her grandma had her hands around the dog’s neck trying to pry it off,” he said.

Banta had left his cellphone at home and said he was unable to use the grandmother’s because in her panic she couldn’t remember her password, so he ran back home and told his fiancee to call an ambulance.

“I grabbed a steak knife – that’s all I could find at the time — went back over there, and the dog still wouldn’t get off, so I stabbed it multiple times,” he said.

Eventually it let go and went behind a TV, where it collapsed.

Banta and the grandmother wrapped the girl in blankets and towels to try to stop the bleeding and waited at the door for help.

“I’m still kind of shook up,” he said. “There was a lot of blood, and stabbing a dog is not fun.”

Little Girl Dies
St. Charles County, MO – Officials confirmed on Monday that a 22-month old girl savagely attacked by her family pit bull-mix last Thursday while under the care of her grandmother has died. Deriah Solem was pronounced dead at Cardinal Glennon Children’s Medical Center on Saturday, according to the medical examiner’s office. The cause of death was listed as injuries to her head and neck. At the time of the attack, her grandmother was babysitting Deriah and her two siblings.

Missouri couple charged in the death of 22-month-old daughter

ST. CHARLES, Mo. — A Missouri couple has been charged with the death of their 22-month-old daughter who died in August after the family’s dog attacked her.

The parents, Sharon and Derek Solem, were arrested and face felony charges of child endangerment and allowing their dog to fatally bite someone FOX 2 reported.

The prosecuting attorney said in the indictment that there was enough evidence to prove that the dog had been aggressive prior to the attack.

“This dog had bitten one of the children in the home on a previous occasion, the dog also showed some very aggressive tendencies toward the victim child in this case,” St. Charles Co. Prosecutor Tim Lohmar told FOX 2. “So that`s what raised this to criminal liability on the part of the parents.”

The child’s grandmother tried to pull the dog from 22-month-old Deriah Solem. The grandmother lost several finger tips while trying to save the infant.

Research is advised before selecting an APBT as a pet. They are often on the list of dogs that many landlords/property management companies do not allow. There are many American towns that have breed specific legislation or restrictions on certain breeds, including the APBT. There are also many countries that have enacted restrictions or bans, such as the United Kingdom, that include the breed.  It is wise to make sure your pet will be allowed into your community.