Skip to content
Home » Blog » Daxton's Friends News » “Don’t bully my breed, but we will bully the victims.” by Beth Clifton – Animals 24-7

A tribute art memorial entitled “Pay it Forward,” honoring 30 recent victims of fatal dog attacks, was unveiled on September 24, 2014 in Grand Rapids, Michigan by Wyoming,  Michigan resident Joan Kowal as an entry in ArtPrize, an annual outdoor art contest attracting upward of 1,500 entrants and more than 400,000 votes from viewers who select the award-winning entries. 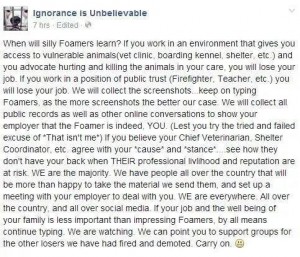 Each victim was portrayed on a cross, along with information about how the person was killed. The killer dogs were identified. About two-thirds were pit bulls, as were 140 of the 216 dogs to have killed Americans since the beginning of 2010.

Displaying thoughtless solidarity, poor social judgment, and some cruelest behavior by fellow humans I have seen short of actual physical violence, pit bull advocates flocked to this sacred memorial, bringing their dogs, to protest that the pit bulls were identified as pit bulls.

Many of the victims were killed by pit bulls from their own households. The information about those pit bulls, including photos of some of them, came from the victims’ grieving families. The pit bull advocates’ protest was simultaneously an exercise in trying to suppress the truth and in disrespecting and bullying the families of the dog attack victims for having shared their painful stories.  The phalanx of demonstrators and pit bulls barely controlled on chains blocked vistors’ view of the information on the crosses for hours. 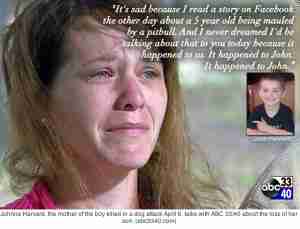 Apart from the sheer nastiness of the demonstrators, their actions illustrate why pit bulls are the dogs most often abused, neglected, and otherwise exploited, to fight and intimidate. This was an act of provocation comparable in rudeness to the Ku Klux Klan repeatedly rallying in the largely Jewish city of Skokie, Illinois, with the difference that Ku Klux Klan members are not notoriously inclined to attack each other and fight to the death without offering even a warning gesture first. These pit bull advocates put their own dogs at risk by bringing them into lunging distance of each other, as well as putting themselves and the public at risk, to try to score propaganda points at a memorial for the recent dead.

Pit bull advocates even distribute false information about victims and survivors to their employers, seeking to get them get them fired from their jobs.

I am not speaking of just a few pathological individuals, but of scores of sociopaths who claim to be defenders of the pit bull, who engage in systematic, organized cyber-stalking and telephone harassment. Many aggressively blame victims and survivors for attacks which typically came either from pit bulls who previously were trusted family members, or pit bulls who rushed out of open doors, leaped out of windows, or jumped fences to attack people who had no idea before that their assailants even existed. Each time the ‘pit bullies’ mystifyingly determine that it is not the dog’s fault that the dog tore off a limb, tongue, or ear of the victim, and allege against the weight of the evidence amassed from more than 5,000 fatal and disfiguring attacks that all dogs do this type of damage.

Click here to read the full story on Animals 24-7 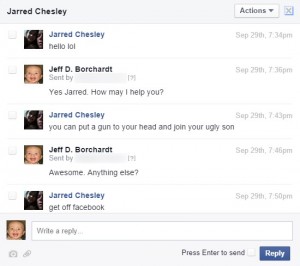 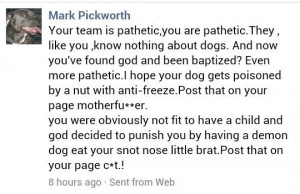