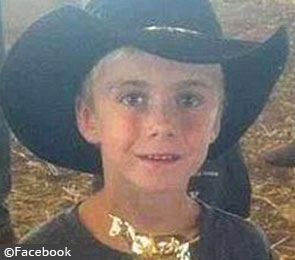 Palmer says Page County deputies were called at 4:53 p.m to 709 Glen Avenue in College Springs after the boy had been attacked.  On arrival, deputies found the boy unresponsive and EMS from Clarinda and College Springs were administering CPR.

The victim was taken by ambulance to the Clarinda Regional Health Center where he was pronounced dead at 5:50 p.m.

The Page County Sheriff’s Office says Malaki Mildward was pronounced dead at Clarinda Regional Health Center at around 5:50 p.m. Sheriff’s deputies were notified shortly before 5 p.m. that the boy was mauled by his family’s two 6-month-old dogs at 709 Glen Avenue in College Springs. The initial report was the victim was not breathing at the time. When deputies arrived, EMS from Clarinda and College Springs were administering CPR to Mildward in the yard.

Boy, 7, mauled to death by his family’s two new dogs at home in Iowa

On Friday, his father Xavier Mildward shared a picture on Facebook of Malaki, with the words: ‘I love you so much my baby boy’.

Page County Sheriff Lyle Palmer told Omaha.com that the dogs were mixed-breeds with some bulldog heritage, but neither would be considered a pit bull.

He said he saw the dogs in the pound Friday morning before they were euthanized and showed ‘no aggressiveness.’

Malaki’s family also had another dog, a bulldog type that was not involved in the attack – it was also put down on Friday morning.

Palmer said Malaki often played outside with the dogs and there had no been any problems.

Six months ago Malaki’s mother posted on Facebook: ‘Have Pitbull English bulldog pups got shots and ready to go message me for details and pics.’

No arrests or charges have been declared.

7-year-old Iowa boy dies after attack by 2 family dogs; both have been euthanized 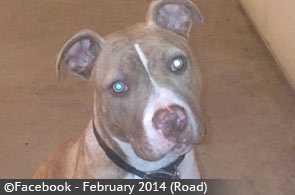 COLLEGE SPRINGS, Iowa — A 7-year-old boy was playing outside his home with two of his family’s dogs Thursday when he was fatally mauled by the dogs.

Investigators have found no witnesses to the attack.

“Those puppies today … they showed no aggressiveness,” he said. “When I went in this morning, they were still wagging their tails.”

Malaki’s family also had another dog, a bulldog type that wasn’t involved in the attack, put down Friday morning, the sheriff said.

“They are in shock,” he said of the boy’s family. “They want to make sure this never happens again.”

Palmer said he hopes to have the investigation wrapped up this weekend. He does not expect any charges to be filed.

“We don’t suspect any negligence or neglect on the parents’ part,” he said. “We have no idea what transpired … I don’t know if we’ll ever know.

“This is a child who has probably played with the puppies since they were born.”

Malaki lived with his older sister, his mother, Amber Braymen, Jeremiah Hicks and Hicks’ son at Hicks’ home in College Springs, a town of 214 located about 80 miles southeast of Omaha.

The white-frame house sits on the east edge of town, with an open field separating it from most of the rest of College Springs.

Malaki often played with the dogs in the yard, Palmer said. On Thursday, his mother was at work, but Hicks was at home with other family members. A relative found Malaki outside after the attack. Someone called 911 just before 5 p.m. 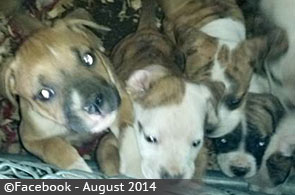 At the time of the biting incident and deadly attack four months later, there were four dogs in the Hicks household, two adult pit bulls, Shipper and Road, a male and female respectively, and two younger dogs, Two Face and Satan. Both younger dogs were 8 or 9 month old pit bull-mixes from Braymen’s August puppy post. People close to the case say that Road and her two fatally attacking offspring were put down after Malaki’s death. Shipper still remains in Hicks’ home.

The Hicks household had inherited the two adult pit bulls through different maternal relationships. As noted earlier, Shipper came with Hicks’ current relationship with Braymen. Road was inherited through the teenager’s mother, Jo Anna Wentworth Parrott. The dog was named Road because it was found on the side of the road and taken in by Parrott. Last February, Parrott left Road and a python snake at the Hicks home with a note, apparently unable to care for them any longer.

So what happened to the alleged “Pitbull English bulldog pups” that Braymen advertised for sale in August that produced at least eight puppies, two of which killed Malaki? It turns out that Parrott had two dogs, Road and a male English bulldog. Road may have been pregnant when it was left at Hicks’ home in February, or there was a planned breeding between the two or there was never an English bulldog involved in the mating. The mating was simply between Shipper and Road.

Finally, Auten and her son had nothing to do with the four pit bulls in Hicks’ home. Hicks also has custody of the boy. It was Auten and her husband that alerted authorities to the September biting incident. For reasons that are still unclear, the bite report was classified as unfounded and no follow up proceeded. Now, after being bitten by Road and witnessing the traumatizing sight of Malaki dead in Hicks’ yard, Auten’s son must return to this same home where Shipper remains.1

Malaki Mildward, 7-years old, was viciously killed by two 8 or 9-month old pit bull-mixes while playing in his yard. There were two adult pit bulls, a male and female, also living at the home, but were inside during the attack. The adult female, Road, had delivered a litter during the previous summer; the two fatally attacking dogs were from that litter. Malaki’s stepfather, Jeremiah Hicks, was in the home when the attack occurred. The boy’s mother and two other children were away. When several family members, including a 10-year old boy, returned to the home, they saw Malaki’s body in the yard. The dogs had horribly attacked the boy and stripped away most of his clothes. Road had bitten the 10-year old boy four months earlier. His mother reported the biting incident to the sheriff’s office and the Iowa Department of Human Services, but DHS classified the bite report as unfounded and no follow through occurred. Road and her two fatally attacking offspring were euthanized; Hicks kept the male pit bull. [source citations]