A 91-year-old woman who was mauled by her own dog in Stamford died this morning, according to officials from Bridgeport Hospital.

Police said the woman suffered serious arm injuries when the dog attacked around 4 p.m. on Friday at her home on Judith Terrace in Stratford.

The dog mauled her in the kitchen and, although the victim was gravely hurt, she was conscious and managed to call 911 on her own, police said.

First responders rushed her to Bridgeport Hospital, where she died, hospital officials said.

Woman, 91, dies after attack by her own dog

According to Stratford Police Capt. Paul DosSantos Antanaitis intervened in a fight between her mediam-size, keeshond-mix dog and her Himalayan cat, and the dog starting biting Antanaitis.

DosSantos said that the dog, which is impounded at Stratford Animal Control, will be tested and likely euthanized.

91-year-old woman mauled to death by her own dog

“Both arms, badly mutilated, that is crazy. It seems unreal to happen around here,” said neighbor Amy Garrison.

Police said the woman owned the dog for eight years. Neighbors said Antanaitis adopted the dog as a puppy, and it had been very well cared for. According to neighbors, the dog had never done anything like this before. Police said it was a very disturbing incident because the dog seemed to have attacked out of nowhere.

Victim Seldom Seen
UPDATE 11/19/14: According to the most recent CTPost.com news report, neighbors rarely saw Stella Antanaitis or her dog outside of her home. “I’ve been here 27 years, and I never saw her walk that dog,” said Olga Figel, who lives two houses away. “I never saw anybody walk that dog,” she said. Also, notably, “reports in the Stratford Star that the woman tried to intervene during a fight between her dog and her cat could not be confirmed by police Tuesday,” states the article.

Two purebred keeshond breeders are interviewed in the news report. One of them, Heather Myers of Killingworth, was shocked to learn the dog turned on its owner of 8-years. Myers also wondered whether it was a rescue dog or whether it is a true Keeshound. “A lot of times our dogs get confused with elkhounds, Siberian huskies and chows,” she explained. Myers will likely be speechless to see a photo of the dog taken by News 12 Connecticut at Stratford Animal Control. 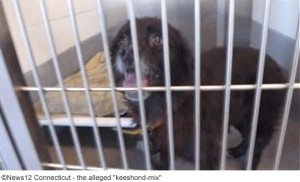 The attacking dog — that Stella had owned for 8-years, since it was a puppy — was described by her daughter and authorities as a “keeshond-mix.” However, a photograph taken of the dog while in quarantine showed little resemblance of a keeshond or even a spitz. This type of poor breed identification by police and animal control after a deadly attack is dangerously incompetent.

On February 4, I wrote a letter to my representative, Congressman Paul Ryan. I wanted to know why the CDC had stopped tracking dog bite fatality information by breeds of dogs in 1998.

After my son was brutally attacked and killed by his babysitter’s two pit bulls on March 6, 2013, I did not talk to the news media. This was far too painful. Instead, I began doing a lot of research on my own about this issue. By June, I felt armed enough with information and ready to share my story with the public. When I agreed to do the WISN interview, I was very adamant in wanting the public to know the current 2013 statistics. By early June, pit bulls were responsible for 93% of all dog bite fatalities (13 of 14 total); my son was one of these deaths.

I was so adamant that the statistics be aired in the segment that I went as far as stating them at least ten times during the lengthy interview. The reporter that interviewed me was very kind and the final story that aired tugged at the heartstrings of the viewer, but she did not use the statistics that I was so insistent on. The next day I asked her why? She said that management uses CDC statistics because it is a universally accepted website; they cite a variety of health related statistics from their website. But the CDC stopped tracking fatalities by dog breed statistics 15-years ago, so there was not any data to cite in my segment. My son’s death and hundreds of others since 1998 are simply uncollected data.

My experience with WISN, along with other similar experiences I have later, compelled me to reach out to my congressman the following year.