Investigators still probing dog attack that killed girl, 9, who was playing in yard of LI home 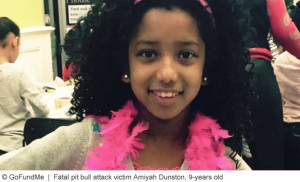 ELMONT, New York — Police have identified the 9-year-old girl who died after being attacked by a pit bull while playing in the backyard of a Long Island home.

Authorities said Monday they were still investigating the circumstance of the attack on Amiyah (ah-MEE-yah) Dunston.

The young girl died Sunday after being attacked by the dog in the yard of an Elmont home.

Acting Nassau District Attorney Madeline Singas says investigators are still trying to determine whether anyone should be criminally charged.

She says there was no indication the dog was dangerous.

The dog’s owner, Carlyle Arnold, was arrested on an unrelated charge of violating an order of protection and held on $10,000 bail. His attorney did not return a call for comment.

Grief counselors were being sent to the young girl’s elementary school. 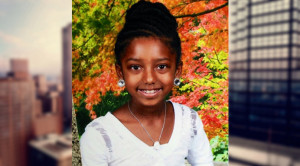 “I wish I could turn back time – too sweet to go,” says family friend Stacie Case.

Three young girls were playing, including the victim were playing in the backyard of the home on Holland Ave. Sunday morning when a pit bull attacked. Witnesses say the dog latched onto her neck, and head, and shook her like a rag doll.

“A woman in the house attempted to pull the pit bull off of her. She could not, and called 911,” said Detective Michael Bitsko of the Nassau County Police Department.

“She tried with a broom – too weak, too scared,” said neighbor Novelette Wilson.

By the time police arrived, Eyewitness News is told that two officers ran to the back, while one went through the house to the rear door.

“The pit bull got distracted and charge at the officer,” adds Detective Bisko.

The officer fired, killing the dog, giving the other officers time to get to the girl.

The victim was rushed to Franklin Hospital/LIJ, but surgeons could not mend what the dog had done. She was pronounced dead a few hours later.

There had been no previous complaints to police about the dog, Bitsko said, adding that he didn’t know why the dog attacked the girl.

The dog’s owner, Carlyle Arnold, 29, lives in a second-floor apartment of the house. He was arrested on an unrelated charge of violating an order of protection and was being questioned about the attack. Hi,  my name is Nicole C Robinson from Long Island, NY. I am the Godmother of Amiyah Dunston, who passed away on 11/8/2015  from being attacked by a pitbull.  The reason why many and myself wanted to start the gofund me page was to help my bestfriend and her family pay for funeral costs. This event has truly been rough because we are still in shock that this has happened to her. So as Amiyah’s Godmother, the least I could do was campaign for her.
We are over joyed with the amount of donations that we have received in honor of Amiyah and appreciate all that are continuing to come in. We had no idea that we would raise the amount that we have so far but at the same time Amiyah was loved by many. The donations will also assist with grief counseling.
Amiyah was a beautiful, smart, talented child who had a heart of gold. She had an impact on all who met her. She brought out the best in us. It has been an honor to hold the title “Godmother” for her and now she is Our Guardian Angel.

Thank you all again for your support and donations! The dog’s owner, Carlyle Arnold (right), was arrested at the scene on charges unrelated to the dog attack. Photo: Ellis Kaplan

The shattered family of a little girl mauled to death by a pit bill on Long Island over the weekendmourned the loss of their ”princess” Monday — as cops weighed whether to bring criminal charges against the dog’s owner.

Mayra Castillo, the devastated mom of Amiyah Dunston of Baldwin, clutched her 9-year-old daughter’s denim jacket as she left her home with friends to pick out funeral clothes for the girl, family said.

“Amiyah Kayla was a phenomenal little girl who has touched many lives with her presence, smiles and laughs. We thank you for all your support and prayers,” Brian Willis, Castillo’s fiancé, who helped raise Amiyah, said to reporters. “Just please let us mourn our terrible, tragic loss.”

Amiyah was visiting her biological father, Tramel Dunston, at 236 Holland Ave. when she was attacked by the pit bull named Kane at around 10:30 a.m. Sunday, according to Willis.

Dunston had been crashing at the Elmont home and was friends with the dog’s owner, Carlyle Arnold, Willis said.

ELMONT, N.Y. — A 9-year-old girl who died after she was attacked by a dog during a play date on Long Island was identified Monday, police in Nassau County said.

Amiyah Dunston, of Baldwin, was mauled in the backyard of a home on Holland Avenue in Elmont about 10:30 a.m. Sunday, police said.

Officers were called to the scene where they found the 9-year-old being attacked by a male pit bull, police said. When one of the officers opened the door to the backyard, the dog stopped attacking the girl and charged toward the officer, who pulled out their service weapons and fired several rounds, killing the animal, police said.

Dunston was rushed to a hospital in critical condition. She died about three hours later, police said.

Child Identified
UPDATE 11/09/15: Nassau County officials have identified the child who was stuck down by the powerful jaws of a pit bull on Sunday. Amiyah Dunston, 9-years old of Baldwin, was visiting a home on Holland Avenue and playing with two other girls outside when a pit bull suddenly executed the killing bite — the dog latched onto her face and neck and shook her violently. The male pit bull belongs to Carlyle Arnold, who is a tenant on the second floor of the building.

Arnold’s Facebook page indicates this pit bull was possibly being trained for bite work. The male pit bull, dubbed “The Beast” by Arnold, is also wearing a weighted collar, as seen on O’Brien’s Canine Supply website that specializes in products for pit bull terriers. The organization notes on their home page that since 1984, they have enjoyed keeping some of the “best old family pit bull lines” which is code language for saying, keeping some of the “best old family fighting bloodlines.”

Lastly, an update by the New York Post today reports that the dog is a 2-year old male pit bull named Kane. The Post also notes that Arnold is “engaged in a playful tug of war” in the Facebook photo, while wearing the weighted collar and clenching down on the ropes of a tug training toy. Whether Arnold was training for bite work or not, this same equipment is used for bite work training and certainly this activity is designed to strengthen the already powerful jaws of a pit bull.