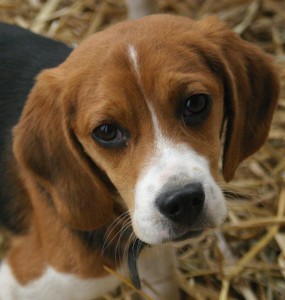 Historically Beagles have existed for over 2,000 years and can be traced back to ancient Greece. This canine was created from a blend of choice hunting hounds in England. In the 1830s, the strongest, most agile Beagles were bred to produce the modern Beagle that we see around our neighborhoods and farms today. Beagles have excellent scent tracking capabilities and are used to track hare, rabbit, and small game. Today’s Beagle often works as a detection dog for US government agencies such as the Department of Agriculture. They are often favored because they are less intimidating to humans than breeds commonly used for police work and have no problem climbing over luggage and packages.

Beagles are well known for their keen sense of smell and steadfast pursuit of foxes, rabbits and small game. They were bred to be eager hunters, so these traits and behaviors are an essential part of their genetic profile. Their well developed sense of smell makes them notorious garbage raiders and food stealers. Beagles are easily trained because they are highly food motivated. People who have Beagles for pets find that they tend to roam or wander due to the curiosity aroused by random scents they pick up and follow. It is essential to build a strong relationship of trust with the Beagle, and use this to train a secure recall. 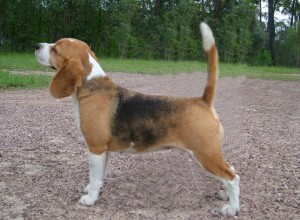 They are outgoing and friendly dogs towards humans and other pets, but can be protective of their homes. This may give rise to excessive barking at suspicious people or sounds. Beagles do not make good guard dogs because they are friendly can easily be won over by strangers. Beagles enjoy “talking” and do raise an alarm at the presence of a stranger. Their utterance is perceived more as a gurgling howl, or baying, to the human ear. Despite being easily trained, they can be very single minded. There are times they choose to ignore commands, or are deaf to them, because they are completely consumed by investigating a scent, a breed trait left over from their tracking origins. They respond well to affection from their owners and love treats (of course!) and compliments.

Beagles are relatively active dogs and require moderate amounts of exercise, long, frequent walks, and a fenced area to run.  They love to chase and explore the outside world. They have incredible endurance, stamina, and energy. Leaving them alone for too long outside might cause them to climb the fence or dig under it.  Proper exercise helps relieve boredom and keep weight off, which is important since they have a great appetite. 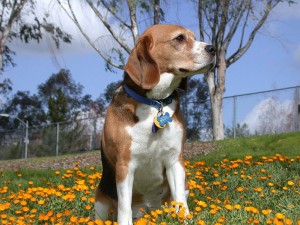 Beagles make excellent family pets and get along extremely well with children. They tend to have easy going personalities and love sharing their lives with people. They generally are happy dogs that are comedic and fun. Beagles usually live peacefully with other dogs, but can be prone to chasing small animals such and squirrels and rabbits.

The Beagle is a smaller breed of dog, weighing about 25-34 pounds. Because of their short coat they are easy to keep groomed. Health problems that are commonly seen in Beagles include epilepsy, eye problems, dwarfism, and ear infections. Their affectionate nature makes them especially prone to separation anxiety. Beagles typically live 15 years.