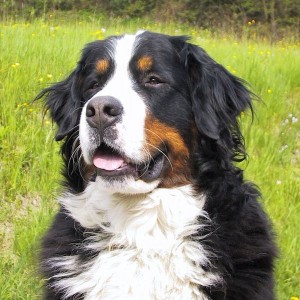 The Bernese Mountain Dog is a large breed mountain dog that originates from Switzerland. They were bred to be drive cattle long distances, cart pulling, and to guard property. Their original name was Durrbachler, named after the small town of Durrbach. The breed was later named for the Canton of Bern in Switzerland.  The AKC recognized the breed in 1937. Towards the end of the 19th century mountain type dogs became popular and efforts were made to preserve the breed. Today, they are most commonly used as companion animals and sometimes in search a rescue work.

The Bernese Mountain Dog is known for their good- natured and docile temperament, which is considered a standard when it comes to breeding. There have been cases where poor breeding did not preserve this standard. The Bernese Mountain Dog is very affectionate and loves the companionship of a family. They generally do well with children and are often tolerant and patient with them. Due to their size, caution should be always be taken when around children. The breed is good with strangers and usually does not mind other animals. Some Bernese males are aggressive with other male dogs. Most are very open to strangers, but some have a tendency to develop exaggerated shyness1. They are natural watch dogs and will alarm bark if they feel it is necessary. They can be territorial2. The breed is slow to mature and can act like puppies for a very long period of time. For the most part, the Bernese Mountain Dog is very well behaved indoors and adjusts well to family life.

Despite being calm indoors, the Bernese Mountain Dog does require regular exercise. They can be very active and have endurance. They enjoy regular daily walks or actual hiking. Due to their breed history, the often like to do activities such as pulling carts.  They also excel at competitive obedience and search and rescue activities. If they do not get proper exercise they can become destructive or excessively bark. 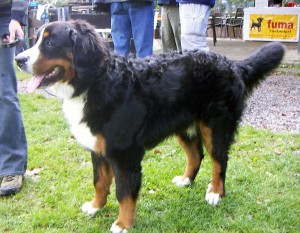 The Bernese Mountain Dog needs basic training and socialization starting from puppyhood. They are sensitive dogs and respond best to positive reinforcement training and gentle handlers. The breed usually does not have socialization issues, but proper socialization should be done as a precaution. They thrive on structure and usually enjoy training.

They typically weigh 80-110 lbs and live 6-8 years. They previously had longer lifespans, but cancer is the leading cause of death. The Bernese Mountain Dog Club of America is researching the cancer issue and seeking solutions.