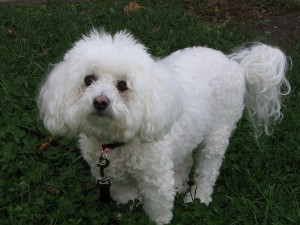 The Bichon Frise originates from the Mediterranean region and was created by crossbreeding the Water Spaniel with the Standard Poodle.  This small and sturdy breed was recorded as early as the 13th century. There are four categories of Bichons, the Bichon Maltese, the Bichon Bolognaise, the Bichon Havanese, and the Bichon Tenerife. Spanish Sailors used Bichons are companion animals and as barter when they were traveling.  They have also been used for entertainment purposes, such as doing tricks in the circus. In the 16th century, breed became extremely popular in Spain and France especially in the French Royal Courts.  Later, he Bichon was brought to the United States in the 1950’s and became a popular pet for families.

Bichon Frises are happy, friendly and playful dogs. They are usually gentle and love human attention and company. The Bichons affectionate and outgoing personalities contributed towards their favor as a popular breed choice throughout history. They are extremely sociable and love to hang out with their families.  They are happy to accompany their families on trips and travel easily. Generally, Bichons are excellent with children and love to play with them. They have a ton of energy and children can keep up with these dogs quite well. They are welcoming to strangers and love the extra attention. Bichons like other animals and enjoy having playmates.  Bichons are not excessive barkers. They may, at times, be territorial and may alarm bark at times.  Bichon Frises can be difficult to housebreak. Otherwise, Bichons are usually easy to live with and that they blend well into most families. 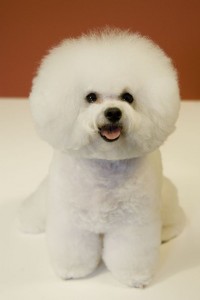 Bichon Frises are lively and energetic dogs. They require daily exercise and playmates to be happy and healthy.  Daily walks are a great way to provide them with exercise and stimulation. They can be happy living without a yard, but will greatly appreciate space to run and play in. Due to their genetics and breed history, they are likely to enjoy playing in the water anywhere they find it.  Without proper exercise, they can become bored and develop unwanted behaviors.

Bichons are considered easy to train, except for housebreaking. They respond well to positive reinforcement and view training as another way to spend time with their family.  With proper training, they are usually very obedient and well behaved.

Bichons Frises need regular grooming to maintain a healthy coat. Grooming is required to remove loose hair and to prevent matting and tangling. Daily brushing is highly recommended. Bichons need to be professionally groomed every 4-8 weeks. These canines may be prone to medical conditions such as eye issues, skin sensitivities, epilepsy, and luxating patellas (dislocated kneecaps). They typically weigh between 7-12 lbs and can live over 15 years. 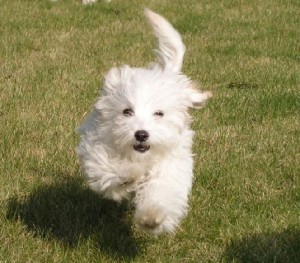