There are two types of ‘Bloodhound’.

The first type looks like this (see Section Two for the second type):

This is the Bloodhound most of us think of when we here the breed’s name. This Bloodhound is one of the oldest breeds of dogs and is thought to be over thousand years old. They are descendants of hounds from St. Hubert, Belgium. They are considered scent hounds and were originally bred for deer and boar hunting purposes. They would track the scent of the animal and lead the hunter to the prey. Their purpose was to find and corner prey, decidedly not to attack it. They were always handled on a leash and never participated in the killing of an animal. There is some dispute about whether the breed’s name refers to its ability to follow the blood trail made by a wounded animal, or whether it refers to its age-old noble blood-line (meaning ‘of good blood’). The name does not refer to a tendency to draw blood!

During the Middle Ages, Bloodhounds were often used for tracking human beings. They have the ability to track through odors that are over 100 hours old and follow it for great distances. They became popular from the 1550’s through the early 1600’s. By the early 1700’s, fox hunting became increasingly popular, there was a decline of deer hunting, and wild boar became extinct, which lead to the Bloodhound becoming rare. Bloodhounds gained popularity again with the rise of dog shows. In the United States during this time, Bloodhounds were common and used for tracking runaway slaves – again, to find them but not to attack them. Today, they are most used for tracking for tracking criminals missing children for law enforcement. The National Police Bloodhound Association was established in 1962. 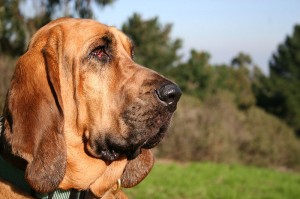 The Bloodhound is gentle, friendly, and affectionate dogs. They are good natured companions and generally make excellent family pets. They love human attention and will indulge in it any chance they get. The breed is very tolerant of children and enjoy spending time with them. Despite being friendly with children, due to size, interactions should always be supervised. They can be very energetic, especially outdoors and are typically rambunctious when young. They are known for becoming calmer after age 2. Bloodhounds are devoted dogs, but usually do not make great guard dogs because they love people, even strangers. They may be a little friendly with strangers and compulsively sniff them in inappropriate places. They may become territorial and alarm bark, but this is not a quality that should be counted on. The breed usually is friendly with other animals and can live in harmony with other household pets. Bloodhounds drool excessively and often snore when sleeping. They are especially noisy due to their hound instinct to howl loudly when excited or for fun.

The Bloodhound loves to be active, especially outdoors. They require a great deal of exercise and need to have long daily walks for physical and mental stimulation. They can walk for hours and do well on long hikes. Walks may not be as enjoyable for owners because the Bloodhound is ALWAYS tracking a scent. Young Bloodhounds should not be exercised as much until they are fully mature. Bloodhounds must be leashed or securely fenced when outdoors. They have a tendency to wander off while following a scent. Bloodhounds that are not properly exercised often become difficult to handle. A Bloodhound should never be exercised right after a meal because the breed is prone to gastric torsion (bloat), which is an acute emergency and often deadly. Several small meals in the course of the day and an hour’s rest after each meal is recommended before exercising the Bloodhound.

Bloodhounds are highly independent and can be difficult to train. Their desire to scent track often interrupts training sessions and may distract the dog from following commands. Owners need to be very patient with training and not confuse this with stubbornness – the dogs can’t help it, their intense absorbtion by scents is what they were created for! They respond best to positive reinforcement training and need consistency. Owners need to understand the breed and have appropriate expectations of their training abilities. If one desires a highly trained companion, the Bloodhound may not be the best choice. Bloodhounds are very sociable dogs, but socialization is still recommended to prevent dogs from becoming timid.

The Bloodhound has a short coat and requires minimal grooming. Their ears do need to be cleaned regularly to keep them healthy and free of infections. Despite bathing, this breed often still has a “dog” smell. The Bloodhound is prone to medical conditions such as gastric torsion, (bloat), hip dysplasia, cancer, ear infections, entropion, ectropion, and a condition referred to as cherry eye. The wrinkles in their skin need regular car (cleaning and drying) so as not to develop skin infections1,2. They typically weigh 80-110 lbs and live an average of 7-8 years. Some have been known to live to 12 years of age, but many die from bloat or cancer earlier.

This is an entirely different type of dog – a mastiff – fighting bulldog mix – and got its name because of its extreme aggression and its desire to draw blood:

‘This singular race was characterized as one of rare aggressiveness. It was a dog of great desire in its job, of much tenacity and of fearless courage. Men feared facing it as it was common that the dogs succeeded to kill without difficulty. It’s bite was particularly strong. It was distinguished from the other dogs also for its resistance and its churlishness. (Rudeness of manners or temper; lack of kindness or courtesy).’ St. Augustine Herald 2-6-1840

These dogs are credited with putting a quick end to various Jamaican slave rebellions (1737, 1795) and they were used to help eradicate the Seminole Indians (1835) 1. Says a fan of this breed: “Descendants of these attack dogs still exist in the American South, now called ‘brindle bulldogs’ and ‘red bulldogs’. Although the Cuban Bloodhound as a race of dog no longer exists, their influence in the curs, hounds and mastiff/bullbreeds of the southeast remains. The Cuban Bloodhound is a direct ancestor of the Brindle Bulldog and Big Red Bulldog, (a large, highly aggressive guard dog being red in color, and quite rare), of Louisiana and Mississippi. (It is said that this Big Red Bulldog is a cross of the Cuban Bulldog and Dogue de Bordeaux, and was developed in Louisiana  in the 18th and 19th centuries as a ferocious and malevolent guard dog). The Cuban Bloodhound was a key ingredient in the makeup of many guard and hunting type dogs of the south in early American history, thus the highly aggressive behavior, as long bred into the Cuban Bloodhound; the notorious “mean streak;” that has followed bulldogs in American history.”2,3,4

We will not extensively describe the Cuban Bloodhound. It should be obvious that this type of dog is not suited as a pet, in particular if you have children in your family.