Boxers originated from Germany and are a cross between the original German and English varieties of bull- and bear-baiting ‘bulldogs’. Early Boxers were very similar to the present day pit bull. The Boxer comes from the same ancestors as the pit bull, though it was developed along the same lines in a different country. 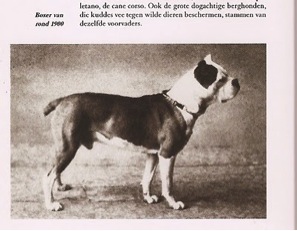 Originally used as gripping dogs during hog hunts, in which they would rip at an animal until the hunter arrived to finish it off, Boxers were also used in dogfighting. After their introduction to the USA around the 20th century, they became popular among the kennel clubs that were showing dogs. The show breed standard eventually led to development of less functional jaw structure and skull profile, lessening their effectiveness as grippers and fighters1.

Boxers are athletic dogs, requiring a lot of exercise, both physically and mentally. They are playful and curious. They must be properly stimulated and exercised to prevent them from becoming bored or frustrated resulting in the development of destructive behaviors. 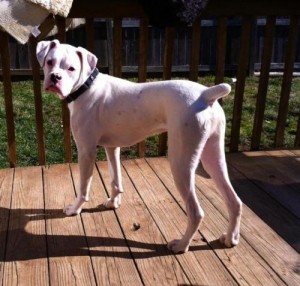 Boxers tend to be suspicious with strangers and extra caution should be taken when introducing them to house guests. If socialized properly, Boxers can get along well with other pets in the home but may not always interact well with other unfamiliar animals. Boxers can be too rambunctious with small children and have sometimes been aggressive to them. Due to their breed history, they cannot be trusted with small pets such as rabbits, hamsters, or birds. Boxers often do not do well at dog parks or places with strangers.

Boxers may experience certain inherited or breed related health issues.   There are several types of cancers that occur within this canine breed.  It’s estimated that about 84% of Boxers develop spondylosis (fusing of verterbra) in the course of their lives2. They may develop heart conditions, degenerative myelopathy of the spinal cord or epilepsy.  The boxer is a brachycephalic

breed with a very short muzzle and the lower jaw of extends beyond the upper jaw. They do not tolerate extremes in temperature.  For instance, Boxers can overheat quickly and caution should be taken when they are playing hard or on a hot day. Boxers are not suited for cold temperatures and get cold easily. Boxers will self-groom, although they will be quick to roll in another animal’s feces and require a bath. They are average shedders and do not require formal grooming.

In North America, from 1982-2015, Boxers have seriously attacked 77 people, resulting in 40 maimings and 8 fatalities.

One thought on “Boxer”