The English Mastiff, which is commonly referred to simply as the Mastiff, is a very old breed of dog that originates in England. Mastiffs were used for bear- and bull-baiting, and by British soldiers in war as early as 55 B.C. The Romans were so impressed by the aggression of the English mastiffs that they considered them superior to their own Roman war dogs. 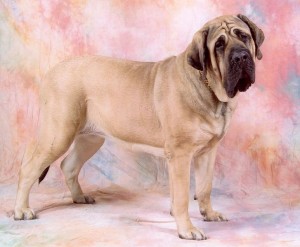 The Romans returned home with this English version of the ‘molosser’, which they fought in Roman arenas against gladiators, lions, bulls, bears, and later other dogs. In England they were also used as guard dogs. There is evidence that Mastiffs came to the United States on the Mayflower, but the first actual documentation was not until the 19th century. The English Mastiff is a contributor to many other breeds of ‘molosser’ type dogs. After bull baiting was banned in 1835, Mastiffs diminished in popularity. Some were bred down to the size of what we now know as the bulldog types, often mixed with terrier and used in dogfighting when that replaced bear-baiting as a blood sport. Today English Mastiffs are mostly used as guard dogs or companion animals.

Fans of the present day Mastiff claim it is a “gentle giant”, calm and even tempered. They are said to love their families and enjoy companionship. Mastiffs are known for their constant drooling and snoring. Mastiff’s are still natural guard dogs and will strive to protect their family and territory. Due to their guarding instincts they may not do well with strangers. It is advised to engage in slow and careful introductions to unfamiliar guests. A generally friendly Mastiff may surprise owners when they sense danger and display aggression. They can do well with children, but due to their size and breed history, extreme caution should be taken.

Training should be started early and owners need to be perseverant, confident, consistent and fair. Firm yet gentle training is recommended. Early socialization is strongly advised to deter unwanted behaviors. Despite socialization, Mastiffs still may have behavior issues or displays of aggression.

Mastiffs should be encouraged to engage in regular exercise to prevent them from becoming too lazy and developing heath issues. It is not recommended that Mastiff run excessively until after they reach the age of two years.  At that time they are usually at the end of their growth stages. Engaging in strenuous activity before fully mature can result in bone and joint health issues. A healthy diet should be fed to them to keep them at an ideal weight until they can exercise more frequently. Daily walks are an appropriate option for proper exercise.

English Mastiffs can do well with other animals, if raised with them. They often do not do well with unfamiliar animals, especially other dogs. Proper socialization and close observation may decrease or prevent aggression towards other animals, but is not a guaranteed solution. Their heritage as animal fighters can still surface. Caution should be taken when introducing them to other animals.

Mastiffs are not excessive shedders and require minimal grooming. They can have medical issues

due to their large stature such as arthritis and hygroma. They are also prone to hip dysplasia, bloat, obesity, ectropion, entropion, osteochondritis dessecans, osteochondrosis, osteosarcoma, and cystinuria2. Behavioral issues listed include aggression, panic disorders, compulsive disorders (eg, spinning, tail chasing)3. Mastiff’s are one of the largest breeds and can weigh over 200 lbs and they live on average 7-10 years.

In North America, from 1982-2015, Mastiffs and mixes have seriously attacked 31 humans that resulted in 6 fatalities.