Great Danes require minimal amount of care to stay healthy. As puppies, it is important not to over exercise them because they are prone to bone and joint issues. Daily walks are an excellent source of exercise without over exerting the dog. Jogging is never recommended. 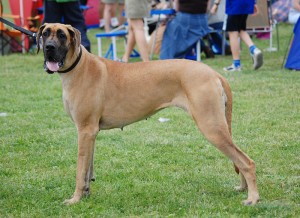 Great Danes have short coats and require minimal grooming. Their metabolism is slow and may result in less food consumption and less energy. This breed is susceptible to medical issues such as hip dysplasia, heart disease, and blindness. They are extremely vulnerable to bloat., an acute emergency life-threatening situation. It has been estimated that 42% of Great Danes develop bloat during their lives.** They typically weigh between 100-200 lbs and typically live 6-8 years; on rare occasions they may live over 10 years.

In North America, from 1982-2015, Great Danes have been responsible for 39 serious attacks on humans that resulted in 21 maimings and 3 fatalities. They can be potentially dangerous due to their breed history, size, and strength.