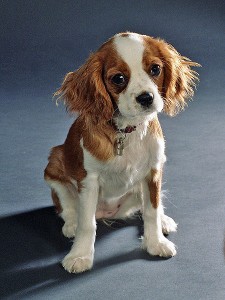 The original King Charles Spaniel was a popular lap dog for royalty as early as the 16th century, but it had changed radically by the time kennel clubs arose (late 19th century). The present Cavalier King Charles Spaniel is the result of an attempt to recreate the original version of the royal breed as it was first depicted in paintings and engravings.  The Cavalier is smaller than real working spaniels and larger than real toy breeds, though it shares traits with both.

Developed from spaniels, but from the very beginning as a companion (not working) dog, the Cavalier is a wonderful housemate. They are highly intelligent, calm and meditative, gentle even in play, patient, sociable. Though not real working dogs, they were sometimes taken out on the hunt, able to keep up with a trotting but not galloping horse – so they can be athletic and do need regular exercise. After a long walk or a vigorous romp, they are content to spend the rest of the day cuddling on the couch. Old traits are persistent in any breed, so too in the Cavalier – the Cavalier can still have the spaniel’s tendency to chase things such as birds, cats, cars, or trash blowing in the wind. It’s important to have them leashed when near traffic and to train a secure recall for places where it’s safe and permitted to have a dog off-leash. Introduced properly, Cavaliers do well with other house pets, from very small ones to other much larger ones such as large dogs, horses and sheep. Their patience makes them good with children, as long as they’re raised knowing that children are friendly beings…and of course as long as children behave like friends. 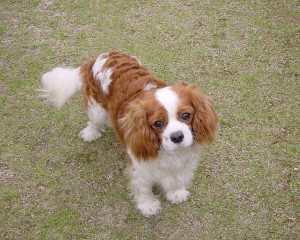 Companion dogs, intelligent, cuddly, Cavaliers do not do well left alone for long periods. Left alone for more than a few hours, they can start chronically barking, calling their owner to please come home. Cavaliers should have company, which can be from other pets, for most of the day. They can tend towards timidity, so it’s important to socialize them early to the fact that people are friendly and the world a safe place. That way, they grow up to be outgoing, confident dogs. They respond wonderfully well to reward-based training, learning quickly and reliably.

The Cavalier’s coat needs regular brushing and maintenance. They shed the whole year round.

Having a Cavalier in the house is like having a little philosopher in residence. However, whoever chooses a Cavalier should be prepared for sadness as the dog gets older. During World War II, breeding stock was reduced to just six dogs. With such a small gene pool to start with, a number of serious congenital health problems became widespread in the breed. About half of Cavaliers will develop mitral valve disease (a heart problem) by the time they are five years old. In some, the disease is evident already by the time they’re a year or two old1,2. About 90% of Cavaliers have a malformation of the back of the skull called ‘syringomyelia’3. In about 70% of Cavaliers, the malformation causes fluid pockets in the skull (called sirynxes)4. Not all Cavaliers that have syringomyelia become symptomatic, but many do: sensitivity around the head and neck area, frequent scratching movement without touching the skin, whimpering (all believed to be signs the dogs are in pain), and loss of proprioception (the sense of where body parts like legs are and how much muscle strength is being used in a movement – essential for things like walking). Progression is variable – the earlier the signs of syringomyelia emerge, the worse the prognosis. There is no treatment for syringomyelia. 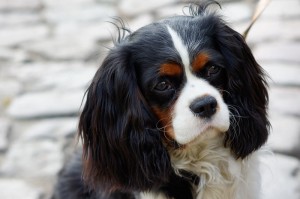 Other common health problems include: hip dysplasia; patella luxation; ‘dry eye’ (keratoconjunctivitis sicca) which also causes dry and flaky skin especially on the feet, and can be so severe that walking can be painful (there is no treatment); other eye problems found in up to 30% of Cavaliers5; Primary Secretory Otitis Media (an ear secretion problem that can be painful and cause symptoms similar to those of syringomyelia) found in up to half of all Cavaliers6; exercise induced collapse; and femoral artery occlusion7.

If you are prepared to carefully choose the breeder, and if necessary to help your Cavalier if some of the health problems emerge anyway, then the otherwise completely delightful Cavalier is a great choice as a family dog.

Note: The British Cavalier KCS Club has developed a breeding protocol to solve the most important hereditary problems in the Cavalier8. The American Cavalier KCS Club rejected that protocol in 20109, replacing it with one that is less effective in helping this breed become healthier. You might want to consult the British protocol (link below, footnote 8) and choose a breeder who does follow this protocol, buying a pup only if the parents are older than five years and both free of the hereditary problems.