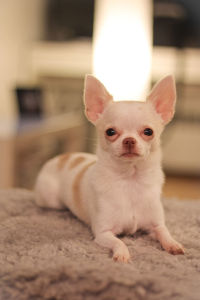 The Chihuahua is considered the smallest breed of dog. The current variation of Chihuahua that has achieved popularity is believed to originate from the area known as Chihuahua in Mexico.  An ancient pot unearthed from this area with a Chihuahua type dog etched on the surface was dated as approximately 1100-1300 AD. The breed’s precise history has been difficult to trace and mostly based on native folklore and archaeological discoveries. Chihuahuas are most likely descendants of the Techichi a small mute dog which was a common companion pet of the Toltec civilization This ancestor was a tiny but powerful and athletic canine. There may have been earlier Chihuahua descendants based upon artifacts found in the Great Pyramid of Cholula, the ruins of Chichen Itza, and across Mesoamerica. What can be verified is that Chihuahua has been a popular companion animal throughout history and continues to be one of most common dog breeds today. They were first recognized by the American Kennel Club in 1904. 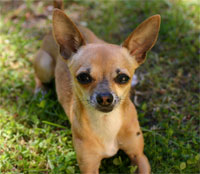 Chihuahuas appear in a wide variety of sizes, head shapes, colors, and coat lengths. Kennel clubs usually recognize two main varieties, the short, smooth coat and the long coat. The breed can also be further classified by two differing head sizes, the “apple head” and the “deer head”. The head shape terms describe their actual head shapes with “apple heads” being rounder in shape and “deer heads” being more slender with longer snouts. Breed standards do not specify height, but both American and British standards specify that they should no more than 6 lbs. Many Chihuahuas exceed the 6 lbs due to obesity issues. There are some pure bred Chihuahua bloodlines that do produce animals that are larger than typical breed standards. For the most part, the breed standards and classifications only apply to show dogs and companion animals often vary greatly. 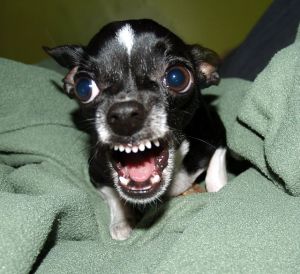 The Chihuahua’s temperament can vary greatly. Chihuahuas have a reputation for being an aggressive breed that can be easily provoked to bite. Because of these aggressive tendencies, they are often not recommended for households with children. However, the level of aggression in Chihuahuas has been greatly exaggerated in the public eye to counter or offset some of the larger breeds of dogs that have known histories of been potentially dangerous to humans. In truth, Chihuahuas express a type of aggression that is usually fear based or guardian based as opposed to genetically being predisposed. They can be hard to manage in situations such as veterinary visits or boarding situations. The aggression is often directed towards the person handling the dog while it is in a fearful state. These canines often act completely different when in their home environment. Chihuahuas have the tendency to bond with a single person. They can be aggressive towards what they believe is a perceived threat towards their beloved person. These canines were never a breed known to actively look for an aggressive encounter by escaping their homes or handlers to bite. A Chihuahua bite usually results in a puncture wound that medical professionals can easily treat. For the most part, Chihuahuas give appropriate or predictable signals prior to the bite such as growling, snarling, or hard barking. They may even pull away and express avoidant body language.  In recent years, possibly as a result of over breeding due to the popularity in movies and among celebrities, the Chihuahua’s temperaments seem to be changing.  The emerging bloodlines of Chihuahuas tend to display less fear aggression, but more fear avoidance. 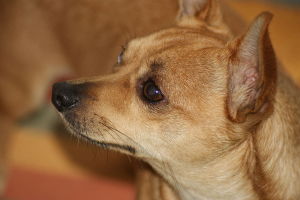 Chihuahuas today are more likely to shake or tremble uncontrollably or be completely frozen with fear. Generally, many can easily be handled by veterinary or kennel staff. They often respond well to gentle handling and are more open to bonding with several people. Many Chihuahuas can be now be placed in homes with children, especially calm children who won’t scare the animal. Despite temperament changes accomplished through selection, there can still be the occasional dog that demonstrates aggressive tendencies and cannot be placed safely with all families. Managing breed traits can be a long process and selective breeding must be practiced by all breeders for successful outcomes in temperament. 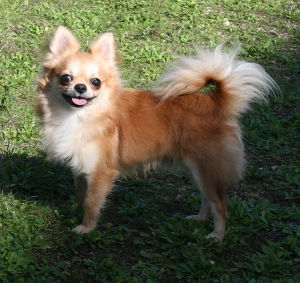 When Chihuahuas are comfortable in their home environment their personalities will often blossom. They are true lap dogs and love the companionship of people. They enjoy being doted on and cuddled. Chihuahuas can be very needy of attention and are not opposed to following owners around the house to constantly ask to be picked up and snuggled. If they are mixed, especially with more independent breeds, such as Rat or Jack Russell Terriers, they can be more confident and independent. They can get along with other dogs, but often need a slow introduction, especially with bigger dogs. They can still respond with fear based aggression towards unfamiliar dogs, but this is usually resolved once they are relaxed with the other dog. If they are very comfortable, they often can become bossy towards other dogs in the household. The majority of aggressive behaviors towards other dogs are considered acceptable warning signals amongst dogs, such as growling or barking. They rarely engage in conflict with other animals. Chihuahuas can be placed in homes with children depending on the Chihuahua’s individual temperament and the children’s personalities. Most Chihuahuas are not comfortable living in chaotic and noisy home environments.  Caution should be taken with children to prevent bites and unintended injuries to the dog. 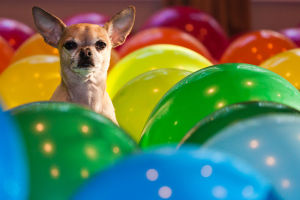 Chihuahuas love to make a den to snuggle in. These dens usually consist of pillows, clothes, or blankets and can made on floors or in beds. They enjoy the dark safety of their den area. People often will not know a Chihuahua is there until they call their name and they come popping out of their den.

Chihuahuas do not easily tolerate cold weather and may require sweaters, jackets, and even boots. They will often tremble when cold and will seek the warmth of sunlight, blankets, people, or other animals. Caution should always be taken during the winter months.

Many Chihuahuas have a soft spot on their head, technically referred to as mollera. Mollera is a condition where the skull is not complete. Chihuahuas are the only breed to be born with this condition and is a normal adaptation so that they can pass through the birth canal. Owners need to be careful to prevent injury to this spot.

Chihuahuas are high risk for hypoglycemia, which is basically low blood sugar. Hypoglycemia can be very dangerous if left untreated, especially in puppies. Dogs that are hypoglycemic can be lethargic, have low energy, shaking, seizures, and fall into a coma and possibly die. Hypoglycemia can be avoided by providing the dog with frequent feedings and giving a sugar supplement.