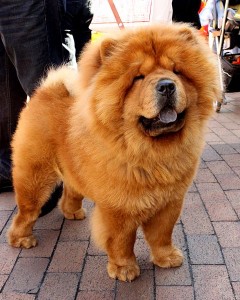 Chow Chows are among the oldest known breed of canines.  Research shows that they were one of the first dog breeds to evolve from the grey wolf. They are believed to have originated in the regions of Siberia and Mongolia. Historical records indicate that they may have been the dog described that accompanied the Mongolian armies as they invaded China, Europe, and the Middle East. Chow Chows were bred to have multiple purposes, such as hunting, pulling, and guarding. They were once used to guard the great temples in China. In certain provinces of China they were used as a food source in times of famine.

Chows Chows are generally a quiet breed of dog and are often described as having a “cat like” personality.  It is in their nature to calm and well behaved.  Chow Chows can be stubborn and need firm and consistent handling. Training helps Chows become better family pets by introducing and maintaining socialization with other dogs and pets while teaching the canine respect for their handlers.  Chows appear to respond quickly to training and perform effectively with an owner who is willing and able to spend a lot of time in with their dog.

They are not overly active and require minimal exercise. Participating in regular daily activities does help reduce boredom and they will enjoy the interaction with their owner or handler.

They form strong bonds with their family and typically bond more with one particular person in a family. For this reason, they are often referred to as a “one person” dog. Chow Chows are known to be highly protective of their territory and families. They are not alarm barkers but this does not mean they will not meet a perceived threat such as an intruder, with aggression. Chow Chows are hesitant to accept strangers and can have aggressive reactions to the presence of an unfamiliar person or animal.

Chow Chows can have an aggressive nature that can extend towards humans and other animals.  Due to strong hunting instincts and prey drive, it is not recommended they live with small animals, including small dogs. Caution and supervision should always be taken when they interact with any animal. They do not belong at dog parks.

They are highly intelligent and independent dogs. They are often described as “aloof”. They are not as willing to please as other breeds because of their highly independent nature. They are loyal and devoted to their owners but we do not recommend them for families with young children. 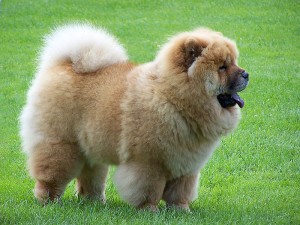 Chows are sturdily built canines and as a breed their frame is compact. They are a medium sized and heavy boned dog. They stand about 17 to 20 inches at the shoulder and weigh between 45-60 lbs. They have a dense coat that requires regular grooming and brushing. This breed is well suited to moderate and cold climates but they do not do well in the heat. Their back legs are very straight which gives a stiff legged appearance. Their mouths are highly pigmented giving their tongues a blue-black appearance. Their average life span is between 9-15 years.

In North America from 1982-2015, Chow Chows has been responsible for 66 attacks on humans that has resulted in 8 fatalities.