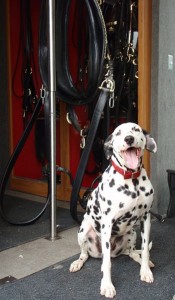 The first depiction of a Dalmatian that we know of was in a wall painting dated about 1360 A.D. Because these spotted dogs were named after the Adriatic coastal region of Dalmatia, we assume that’s where they originated. During the 17th – 19th century, the Dalmatian was a society dog, trained to run alongside ladies coaches. Their spot matched nicely with the ermine furs these ladies like to wear, but the Dals were also useful in keeping stray dogs at bay that might have spooked the horses. Because of this latter function, Dalmatians were also used to accompany stagecoaches and fire-house wagons. If raised with horses, the Dalmatian is comfortable with them and nimble enough to live in the stable without getting trampled, so they also served guard duty in the stables at night to keep away thieves.1 It wasn’t until the 20th century, with the appearance of the movie ‘101 Dalmatians’, that they again became a fashion dog.

Dalmatians are generally highly intelligent and respond well to gentle, consistent training. They are playful, energetic, and require plenty of daily attention and exercise to keep it happy and healthy. Keep in mind they were bred to run up to 40 miles per day next to a carriage, and no matter what anyone tells you, dogs don’t entirely lose the traits their original function required.  Dalmatians are not ‘hyper’, but if they are not active and working, they can become frustrated and destructive. They do fine with other dogs, though their play can be too energetic for very young puppies or very old dogs.

Dalmatians can make good family pets and have a desire to spend time with their families. They have strong bonds with their families and make excellent watchdogs, alerting you to strangers in the yard or house.  They do have a tendency to be too rambunctious or high strung for toddlers and children. They often make better pets for active people with older children. They blend best with families that invest time in properly training and exercising them. 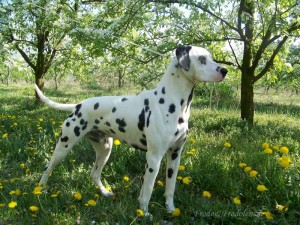 It is important to know that about 10 – 12% of Dalmatians are born deaf in both ears. Another 22 – 25% are born deaf in one ear2,3. This means they won’t hear commands, won’t hear a human approaching, or another dog, etc. If your Dalmatian puppy seems to be aloof and to ignore commands, this isn’t dominance! Most likely he just doesn’t hear you. In this case, you can train him to hand signals, which dogs learn even more easily than they learn verbal commands. If your Dalmatian is deaf, it’s important to do gentle ‘startle training’, teaching the  dog that a sudden touch or the sudden appearance of someone means something good is going to happen4. In general it is important to use reward-based training with Dalmatians, so that deaf or not they retain their good nature and expectations that humans (and children) are good news – even if we appear seemingly out of nowhere.

The majority of Dalmatians are healthy, but some can suffer from urinary stones, deafness, and allergies. This breed is born white and its spots develop in the first month of life. Their coats constantly shed and their hair can be difficult to remove from furniture or clothing. They are a well muscled dog that stands between 19 to 24 inches at the shoulder and weigh 35-70 lbs. Their average lifespan is 11-13 years.

In North America from 1982-2015, Dalmatians have been responsible for 3 serious attacks that resulted in maimings. They are known to frequently bite, but rarely cause serious injury. The high frequency of deafness in the breed is probably at the bottom of this behavior, combined with people mistaking deafness for ‘dominance’ and becoming harsh with the dog6.

4. Excellent tips for this kind of training can be found at: http://deafdogsforever.weebly.com/bonding–reflexes.html (accessed February 2014)

6. For emphasis and safety we’ll repeat: If you choose a Dal,  you should consider that almost 30% of them suffer some degree of deafness. The fact that there have been only three serious attacks in 31 years indicates that the Dalmatian is anything but inherently dangerous – but it is an indication of how important it is to use friendly, gentle training techniques with this breed so that even the deaf Dal will feel safe and welcome human interaction rather than being on the defensive when we approach or startle him. The prevalence of deafness makes the Dal probably not the best choice for a family with very young children.