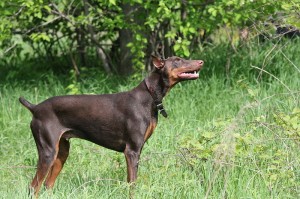 The Doberman Pinscher was created from a mix of German hunting dogs. Later it was used to perform duties as a watchdog and bodyguard. It was bred to be fearless, intimidating, aggressive, and ferocious, to complete the role as a personal protection dog, police dog, and war dog. Later the Doberman was used for tracking, sentry, guarding, police work, military work, and search and rescue (SAR). These canines are not used as much today in these roles as other breeds replaced them. The breed has since been refined into the Doberman it is today.

The Doberman is by nature sensitive and prone to varying degrees of neophobia (fear of new things). Even today’s companion-bred dogs retain the breed’s original active defense reflex. Thorough socialization to ingrain the world as a safe and pleasant place is essential, as are reward-based training methods. If a Doberman is not well socialized, or if it’s handled or trained with harsh methods, it can easily develop defensive fear aggression. The dog can become aggressive towards strangers and other dogs.  Combined with their strength and size, this makes them potentially dangerous especially to non family members and unfamiliar dogs. The fashion of cropping ears and tail can make it difficult to read the Doberman’s mood and see when it is anxious or otherwise uncomfortable in a given situation. The 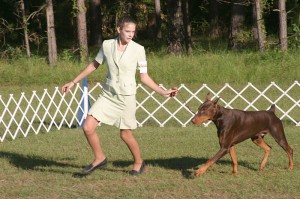 Doberman is not recommended for a family with children, an elderly person, or anyone with disabilities.

The Doberman is an intelligent dog. As long as non-aversive training methods are used, Dobermans are quick to learn. They are playful, curious, and versatile. Despite the change in disposition through generations, they are still agile, powerful, and strong.  They are energetic with an impressive stamina and need daily walks or jogs with a strong fit owner. Doberman Pinschers need to be properly socialized, and obedience trained. They bond well with owners who treat them well and may exhibit protective qualities in various situations.

The Doberman weighs about 60-90 pounds. They are average shedders and need very little grooming. Their coats are not suitable for cold climates and they do best as indoor pets. They are prone to health issues, such as dilated cardiomyopathy, cervical vertebral instability, Von Willebrand’s disease, canine compulsive disorder (in particular flank sucking), prostatic disease, hypothyroidism, and hip dysplasia. Their lifespan can be about 13 years, unless they die of failure of the all too common enlarged heart**.

In North America, from 1982 – 2015, Doberman Pinschers have seriously attacked 26 humans, resulting in 15 maimings and 8 fatalities.

One thought on “Doberman Pinscher”