The Dogo Argentino is a South American mix of various European fighting / baiting types of dogs. It was created mostly from the Cordoba fighting dog (Perro de Pelea Cordobes). The Cordoba fighting dog was a mix of the original English bear-, bull- and horse-shredding mastiff, back-crossed with the pit-fighting bulldog  and the English bull terrier. It was created expressly for dogfighting. The Cordoba fighting dog was noted for its willingness to fight to the death and for its high pain tolerance, continuing to fight even when it was mortally wounded. It was so aggressive that the males and females preferred to fight rather than mate. It was unstable and often turned on its human handlers. 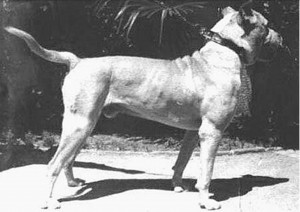 In the early 1920s two brothers in an elite dogfighters’ family became interested in creating a larger, more dependable fighting dog that could also be used to hunt dangerous wild animals. The brothers wanted the new dog  to be stable, but nevertheless so large, tenacious and tireless that a single dog would be able to catch and debilitate a puma. Sometimes called the Argentine bulldog, the Dogo Argentino  (also called the Argentinean Mastiff) was created by back-crossing the Cordoba fighting dog with several other fighting / baiting breeds: the Spanish mastiff, Dogue de Bordeaux and Great Dane (which at the time was still a barrel-bodied German mastiff type), and some English bull terrier, Boxer, and pit-fighting bulldog to add agility. It is said that some pointer was added to get a keen sense of smell, Great Pyrenese to get the white coat, and Irish Wolfhound for running stamina.

After dogfighting was banned in Argentina in 1954, the fans of the Argentinean Mastiff began promoting it exclusively as a hunting dog, though it continued to be used in clandestine dogfighting.

The Dogo Argentino now looks much like the Cordoba fighting dog did, but larger. The Cordoba fighting dog is extinct – probably replaced by the Dogo Argentino as the favored pit fighter. Though the breeding program was started in the 1920s, the Argentinean Mastiff was not recognized by any legitimate kennel club until 1973 (the Federation Cynologique Iinternational). 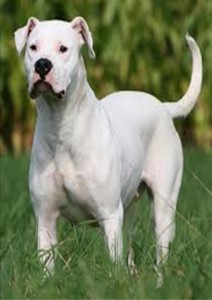 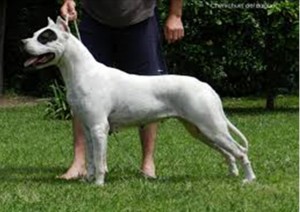 The Dogo Argentino is still used in Argentina as a fighting dog. Like many of the fighting breeds in North America, it is still also used to hunt wild boar and mountain lions, still able to attack and debilitate these animals for the hunter. As bans on dogfighting became more widespread, and as many animals such as pumas and bears began to enjoy some protection as endangered species, breeders began promoting the Dogo as a household pet., much the same as the breeders of North American fighting breeds did.

The Dogo Argentino is a loyal dog that bonds strongly with its trainer, provided the trainer uses non-violent but consistent training techniques. They are said to be trustworthy with members of the household whom they grow up with. They make excellent guard dogs and will protect their family and property fiercely.  They must not be trained as guard dogs – training isn’t necessary to awaken their guarding instincts. Rather, they need intensive training that not every unfamiliar thing needs to be guarded against. They can display serious aggression with strangers. Extreme caution should be taken when introducing a Dogo to unfamiliar people. They do have a playful nature and can be fun loving dogs.

Though the fans claim that the Dogo is fine with children in its own family, other sources caution that it can be untrustworthy with non-family children – neighborhood kids and friends who come over to play. Due its breed history and traits, we do not recommend the Dogo to families with small children. All interactions with children of any age should proceed with caution and always be closely supervised. 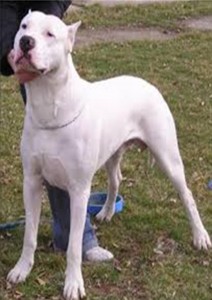 The Dogo Argentino is still essentially a fighting and animal-baiting dog. The Dogo Argentino can be alright  with dogs of the opposite sex that it is raised with from its puppy days, but serious fights can still break out. It is not recommended to try to keep a Dogo with another dog of the same sex. A Dogo must never be left unsupervised with the other household dogs, no matter how long they’ve lived together.

They are not recommended for homes with any other, non-canine pets. Though they can be alright with animals they grew up with, their hunting instincts can suddenly kick in. Dogos are often highly aggressive to unfamiliar animals and it is not recommended they interact at all with animals that don’t belong to their household. They are known to be aggressive towards both small and large animals. The Dogo Argentino is not a suitable or a safe dog to bring to off leash dog parks.

Dogos can be very difficult to manage. It is recommended that training and socialization is started early. This breed requires a handler that uses humane techniques, but is at all times also firm and consistent. The Dogo Argentino is a large, powerful dog and can become unmanageable quickly. Despite proper training and socialization, the Dogo may still have unwanted behaviors, such as aggression.

Dogo Argentinos are high energy dogs that crave physical and mental stimulation. They can become destructive if they get bored. They require daily, vigorous exercise. Long walks on a daily schedule and play time within their own securely fenced yard are ideal ways to exercise a Dogo. Be sure the walker is big and strong enough to control the Dogo on a leash if it  sees unfamiliar children or other animals. These canines can also engage in activities such as weight pulling, though activities are not recommended where groups of dogs are together unleashed or where unleashed dogs can approach the Dogo.

Dogos like to spend time outdoors, but are highly sensitive to cold temperatures. Be sure your yard has a sturdy fence secure and high enough to keep curious children out.

This breed has been banned in several towns, counties, and countries, such as the United Kingdom because of their aggressive tendencies. Proper research should be done to ensure the Argentino Dogo is allowed in your community.

The Dogo Argentino is an average shedder and requires very little grooming. They are prone to medical issues such as hip dysplasia and deafness. They weigh between 80-100 lbs and typically live 10-12 year.

In North America, from 1982-2015, Dogo Argentinos have been responsible for 5 serious attacks on humans that resulted in 1 fatality. This breed in rare in North America.

History of the Dogo Argentino at http://www.huntingdogos.com/dogo_history.asp (accessed March 2014)