Daxton's Friends
Monday, August 19, 2013
What happened to Gavin?
There was a time when Maggie would have heartily recommended a pit bull as a family pet, but she no longer feel that way. Here is how a real-life education about pit bulls changed her mind. 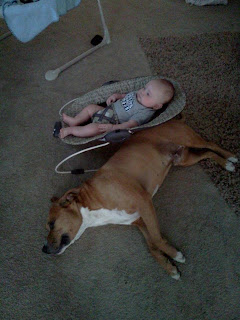 My boyfriend Greg had had a pitbull named Bexar for 6 and a half years. He’d raised him from a pup and Bexar was a very well behaved dog and listened to everything Greg would tell him. Greg and I got together over 2 years ago, moved in with each other and Bexar came too. I instantly fell in love with Bexar. He was my “sweet boy”. He would give you kisses for hours, even smiled at us every time we walked in the door. 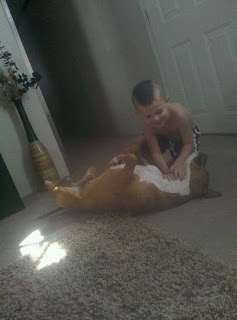 I got pregnant in April 2011 and gave birth to our son in Feb. 2012. Everyone in my family was very concerned about Bexar. We insisted that he would never hurt anyone ever! (well, at least we were sure Bexar wouldn’t ever actually hurt a person – cats and other animals were a different story). Bexar was great with our son Trenton, just as we expected him to be. 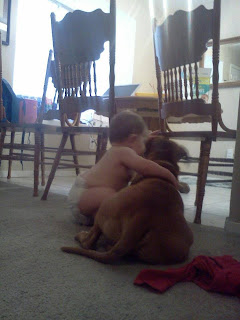 Trenton had just started crawling in September 2012. We would let him crawl over to Bexar, pat him on the head, play with his ears, let Bexar give him kisses, etc. Bexar would even sleep in front of his crib. He had been around kids his whole life. Family, nieces and nephews, friends kids of all ages.

On Saturday November 10th, 2012 my mom came to my house to hang out and visit and brought Gavin, my 5 year old cousin. Gavin had stayed with us many times before playing with everyone all day, including Bexar, who he loved to play with. Eventually about 10 visitors had arrived at the house and were in the backyard socializing while Greg and I were inside trying to put Trenton to sleep. 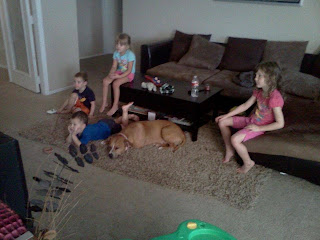 The backdoor was open and suddenly we heard people screaming from outside. Bexar, with zero warning, had lunged at Gavin, and his jaws were clamped down on Gavin’s face, right in front of everyone. Let me point out that there were 8 people within arms reach of Gavin when Bexar attacked. This is a critical point, because I have heard from many people about this, who say that they would never leave their children “alone” with “any” dog. Gavin was far from being alone when this attack happened. Even 4 grown men were unable to pry Bexar’s jaws off of Gavin’s head. Greg ran out and was finally able to get Bexar to release, saving Gavin’s life. 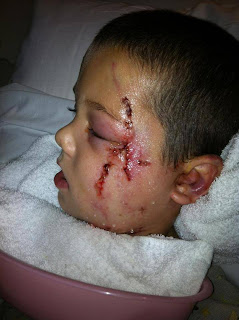 Gavin was rushed to the hospital, then transported to Texas Children’s due to the severity of his injuries. He’s since had multiple surgeries on his face and jaw and will need more in the years to come. Bexar barely missed his temple, barely missed his eyeball, and barely missed the main artery in his neck. Greg and I took Bexar and had him put down that night.
In retrospect, we had felt supremely confident that Bexar would never do anything like that – ever. We’d argued with many about pit bulls and told them that “it’s all how you raise them”. I know that there are people out there who still think it’s all in how you raise them, and my goal is to educate and raise awareness of the breed, in the hope that future tragedies can be averted.
We never want to see what we went through happen to someone else’s loved ones. I wouldn’t wish the pain that our family has gone through, and more importantly, the pain and suffering that it has caused for our sweet Gavin, on my worst enemy.