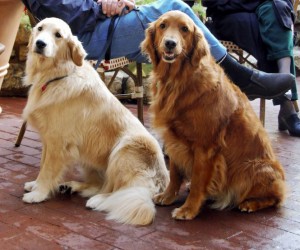 In the mid 19th century, wealthy Scots enjoyed wildfowl hunting and desired a dog that could retrieve game from water and land. With firearm improvements being made, hunts could be made from a farther distance and many fowl were lost in the field. The Golden Retriever was developed by crossing various existing retrievers, setters and spaniels. The Golden Retriever was recognized by the AKC in 1925. Today Golden Retrievers are still used for hunting, as well as being used as service dogs and companion animals.

There are three types of Golden Retrievers, the English, American, and Canadian. The types are distinguished by a difference in physical appearance. The English version can be found in England and Australia and have a wider muzzle and a blocky head. They have shorter legs and a deeper chest. American Golden Retrievers are lankier in appearance and their bodies are proportionate. The Canadian version is taller and leaner than the English counterparts and their fur is more dense and darker in color.

The Golden Retriever is one of the most common breeds in the United States because they are affectionate, intelligent, friendly, and make great family dogs. They are extremely patient and gentle with children and tolerate a very active family. Despite their excellent record children, it is never recommended to leave children unsupervised with any animal. They have a tendency to love everyone they meet and are not suitable guard dogs. They may alert bark, but often immediately greet strangers. They usually do wonderfully with other animals and can engage in activities such as visiting the dog park. 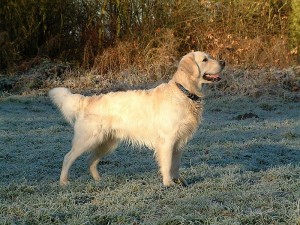 Golden Retrievers are very active and energetic dogs, especially when younger. They need to be stimulated mentally and physically. They require regular exercise and activity, or they may become bored and destructive. They LOVE to retrieve toys and will often walk around gently holding a toy in their mouth. The Golden Retriever does not require a large yard, but just enough space to play in.

This breed will require early socialization and training. Most Golden Retrievers are highly social and rarely have socialization issues. They just need to adjust to going to new places so they are not timid or afraid. Golden Retrievers need reward-based training for mental stimulation and to become well behaved dogs. They can be exuberant when young and can become hard to manage. They need to learn basic commands to help owners stay in control. They are eager to please their owners and are highly trainable. They can be easily distracted during training, but consistency will help the Golden Retriever stay on task. They usually enjoy activites such as agility, competitive obedience training, and swimming.

A breed never loses the traits it needed for its original job. The Golden Retriever can be mouthy – this is not aggression, but is because it was bred to carry things softly in its mouth. Provide a box of toys so he can grab things to carry instead of mouthing when he wants attention. It can be hard to keep a Golden Retriever out of the water once he’s learned to swim. If you want to bring home a clean dog, leashing him near muddy or polluted water is recommended. 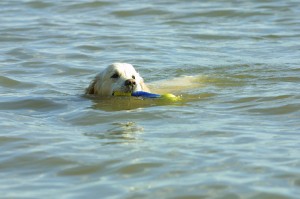 The Golden Retriever requires regular brushing and occasional bathing. They shed heavily twice and year and have moderate shedding all year long. Golden Retrievers are prone to medical issues such as hip dysplasia, elbow dysplasia, polyneuropathy, inflammatory bowel disease, muscular dystrophy, cancer, heart issues, ear infections, chronic progressive hepatitis, weight issues, and skin allergies1. The trait of ‘impulsive aggression’ (also called ‘rage syndrome’) surfaced in the Golden Retriever about 40 years ago. It is rare in the breed, but it does occur. It is estimated that one in 100 puppies are at risk for carrying the trait2. The Golden Retriever usually weighs between 50-80 lbs and typically lives 10-13 years.

In North America, from 1982 to 2015, Golden Retrievers have seriously attacked 11 humans, resulting in 7 maimings and 3 fatalities.