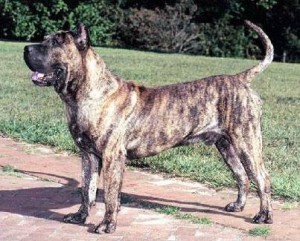 Sometimes referred to as “Canary dogs”, The Presa Canario is not really originally from the Canary Islands. When Norman Betancourt, conqueror,  first arrived at these Northwest African islands in 1402, financed by the Spanish king, he described the indigenous dogs as wolfish in looks and small in size1.  It was probably these Spanish conquerors who imported their molosser type war dogs to the islands (15th century). (English Mastiff) After the conquest, these dogs were used as guard dogs, and by butchers to bait cattle during slaughter (people believed back then that an animal that died in terror and pain would taste better than one that was calm as its throat was slit).  In 1526, it was ordered on the islands that all of these dogs be shot because these huge baiting dogs were causing so much damage to domestic animals and cattle. Only two were allowed to be kept by butchers, and those had to be chained unless they were fulfilling their grim duties.  Two more were kept on the outside of town to kill stray dogs that threatened people or livestock. These two were not allowed to come into the town. 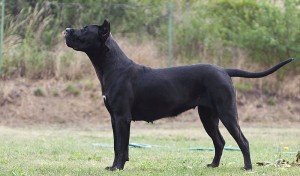 In the 17th century, British began to visit the islands, bringing both their tradition of dogfighting and their fighting bulldogs with them. (Staffordshire Terrier) These were inevitably mixed with the already present Spanish molossers to create a better fighting dog. We now had a dog “that had features appropriate for the participation in dogfights such as quickness and adroitness, fearlessness in fight, great physical strength and incredible persistence”2,3.

When dogfighting was banned in Spain, this Presa Canario (which was still just a regional type without an official breed name) began to die out. In the 1970s, when the AKC finally agreed to register the fighting pit bull terrier as a ‘new’ breed (under the name ‘Staffordshire Terrier’), revival of the fighting Presa type began too. It wasn’t until 2001 that legitimate kennel clubs were persuaded to register these molosser – pit bull mixes as an official ‘breed’. The European FCI chose the name ‘Dogo Canario’ because it sounded less violent. The AKC now recognizes the same ‘breed’ under the name ‘Presa Canario’4. Today, they are among the most popular fighting dogs in Spain.

The fans say that Presa Canarios are calm and affectionate dogs. They may bond well with their owners and can function as companion animals. It is important that all household members are comfortable around the dog and not be timid. This breed has a long and bloody history, and they are still used for dogfighting and shredding large wild animals alive. Like all working breeds, the traits needed for the original tasks are still present. The dogs can maintain their guarding and fighting instincts and have a desire to protect their owners.  They are usually extremely territorial.

Presa Canarios need intense early socialization and training to help deter unwanted and aggressive behaviors. As puppies they can be fun and playful.  In time, their behavior and personalities can change as they mature. It cannot be stressed too much that the owner must be confident leaders that are dedicated to observant social interaction and obedience training. All members of the household must be comfortable handling the dog and strictly follow the training guidelines. Presa Canarios are often leery of strangers and can act aggressively towards them. Caution should always be taken when introducing them to strangers because their size and strength can make them very dangerous. They are dangerous for other animals, from horses and cattle to other dogs. They cannot be allowed to roam the neighborhood, and they don’t belong at dog parks, since interrupting attacks on other animals can lead them to redirect the attack onto the human who interferes. They should be walked by someone strong and heavy enough to control the dog. You cannot keep a Presa Canario with any dog of the same sex, and they will often attack even a dog of the opposite sex. You must never leave the Presa Canario at home with other animals unsupervised – they must be locked away until you return. 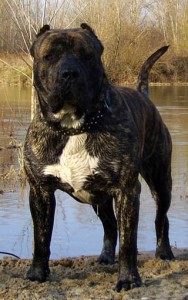 Presa Canarios require a minimum amount of exercise. They mostly enjoy daily walks and have no issue with spending plenty of time indoors relaxing. It is important that the owner has control over the dog while out walking. They can be extremely strong and overpower owners easily. One case where Presa Canarios slipped from their owner’s control to attack led to a murder conviction5. There are several cases of Presa Canarios suddenly attacking and killing their loving owners6 or redirecting onto an owner who tried to stop an attack on another dog. We do not recommend this breed for families with children.

Presa Canarios can be difficult to manage and own and require experienced dog handlers. They may not be well suited for most families.  Due to history, size, and strength, strong consideration should be taken before bringing one into a family situation even where there are no small children present.

In North America, from 1982-2015, Presa Canarios have been responsible for 115 attacks on humans that resulted in 18 fatalities.

1. Bontier, P, Le Verrier, J, and Major, R.H., The Canarian, or Book of the Conquest and Conversion of the Canarians in 1402 by Messire Jean de Bethencourt, Kt. (1872), printed for the Hakluyt Society, London.

4. Difference Between the Presa Canario and the Dogo Canario at http://lasislasdedoramas.com/articles/2012/10/why-dogo-canario-and-not-presa-canario/ (accessed March 2014)