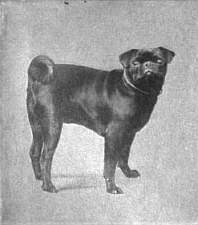 The Pug originated from Asia, most likely China, and was bred specifically to be pets for the emperor’s family. There is not much detail of their history in China and their heritage is better documented upon their arrival in Europe. During the 1500’s, Dutch traders introduced the Pug to the west. They soon became popular pets of kings and queens across Europe. They were the official dog of the House of Orange and in the Netherlands and were the personal favorite of Queen Victoria and her family and Napoleon Bonaparte’s wife, Josephine.  One legend tells of a pug owned by William the Silent who barked and scratched his master to alert the Prince of Orange of the presence of assassins who were attempting to sneak into his tent.

In 1688, it is suggested that the pug was crossed with the King Charles Spaniel to create a longer and leaner appearance. The modern Pug is much shorter and stockier than the version that became popular in Europe. It is thought that in 1860 Pugs from China were again imported and became what is now is considered today’s breed standard. During their popularity in Europe, they were depicted in paintings riding in carriages and dressed in jackets. The American Kennel Club recognized the breed in 1885. The Pug Club of America was founded in 1931. In 1981, a Pug won the Westminster Kennel Club dog show and in 2004, the Pug won the Best in Show at the World Dog Show. The Pug has made its mark in history and continues to be a favorite breed choice. 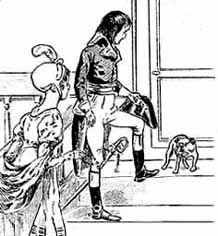 The modern Pug has a compact square body with a short-muzzle and wrinkled face and a curly, corkscrew or pig like tail. They have a smooth coat and can come in a variety of colors, but fawn or black are the most common. The fawn coloration includes a black mask. The Pug’s teeth lower teeth usually protrude further the than the upper teeth and results in what is known as an under-bite.

Pugs are even tempered dogs that tend to have playful and outgoing personalities. The majority of Pugs love everyone they meet especially children. Their boxy build gives them structural soundness that makes them ideal playmates for children. They desire to be near people and will often follow owners around so they don’t miss anything. They were bred to be a companion animal and that is exactly what they strive to be. A Pug never turns down a lap. They enjoy sitting on a human lap and spending quality time relaxing with their owner. The Pug can be stubborn, but are rarely ever aggressive. Like many short muzzled dogs, Pugs tend to be lazy and enjoy napping, which can include snoring. Despite being very suitable for families, it is never advised that children are unsupervised with any dog.

The Pug is considered one of the easiest dog breeds to own. They are suitable for community living environments or in single family homes. They do not mind being country dogs or city dogs. They love people, and are very flexible with what types of people. They can be happy living with a bunch or children of elderly folks. They do not mind being an only pet or living in a multi pet household. The Pug is open to anything, as long as they can be part of a loving home and environment.

While the Pug has plenty of positive qualities, they do have one major negative flaw that must be considered. The Pug is a breed of dog known to a multitude of medical issues. These medical conditions may range from minimal maintenance costs to expensive surgeries. 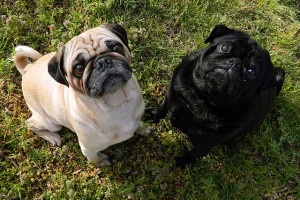 Pugs thrive in moderate climates. They have short muzzles (brachycephalic) and compact breathing airways, which results in the inability to efficiently regulate their own body temperature. Therefore, extreme caution must be taken during periods of hot weather to avoid heatstroke and breathing difficulties, which can cause death. They do not have a thick layered coat that will allow them to tolerate cold temperatures. They are a breed that will appreciate a warm jacket for the winter weather. Since they do not do well in cold or hot temperatures, it is recommended that they are not left outside for long periods of time and should always be supervised, especially in the heat. It is not recommended that Pugs ride in airplane cargo areas where temperatures cannot be properly controlled.

The Pug has an issue with food, they love it. They will eat until their bodies perfectly match their pig like tails. This passion for food can lead many Pugs to become over weight. Owners must manage their food intake carefully. Obesity can cause a variety of health issues in this breed. Body weight can be managed through regular daily exercise and a proper diet. Exercise should be light to avoid over exertion that can cause breathing difficulties or dangerously raise their body temperature.

Pugs have wrinkly faces, which can be cute but require medical maintenance. The wrinkles trap dirt and debris and promote the growth of yeast and bacteria. Owners of dog breeds with wrinkles must clean in between the creases on a regular basis to prevent irritation or infection. 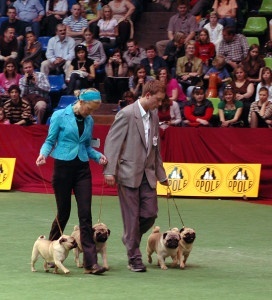 Pugs are one of the dog breeds very susceptible to demodectic mange, also referred to as “demodex”. Demodex is caused by parasitic mites that are present on a dog’s skin. Many dogs have demodex, but do not display symptoms. Dogs with weakened immune systems can suffer from skin irritation and hair loss. A dog’s breeding line and genetics play a role in whether or not the animal will be vulnerable to demodex. Demodectic mange can be easily treated by a veterinarian.

Due to their short snouts and prominent brow ridge, the Pug is prone to eye injuries. Common injuries can include proptosis, also known as eye dislocation, entropion, and cornea injuries. Caution should be taken when Pugs are at play to avoid damaging their eyes. Pugs can also experience an eye prolapse. Eye prolapses can be caused by a head or neck injury or something as simple as pulling on the leash too hard. When the eye prolapses, it leaves the socket. The eye can sometimes be pushed back into the socket by a veterinarian, but some require surgery. Many Pugs make visits to emergency veterinarians for unexpected eye injuries. 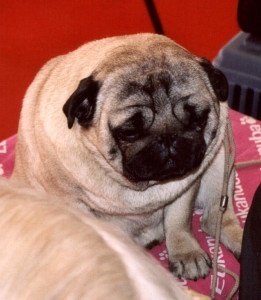 Pugs are also prone to a pharyngeal gag reflux, which is also commonly referred to as “reverse sneezing”. Reverse sneezing is usually due fluid getting trapped under their elongated palate and irritating the throat and causing breathing restriction. When excited or during leash pulling, they can gasp and snort, making a sound that does not often sound like a sneeze, but a goose.  As alarming as reverse sneezing can be, it usually does not harm the dog. It can be prevented by trying to limit how excited the dog gets and by using a harness that does not put pressure on the throat or trachea.  During a reverse sneezing fit, an owner can cover the dog’s nose to force it to mouth breath or massage the dog’s throat to order to try to end the fit.

Many Pugs are born with stenotic nares, which are narrow or pinched nostrils that restrict proper breathing. Stenotic nares can often put pressure on the larynx making it even more difficult for the dog to breathe. This condition can cause a Pug to pass out or temporarily lose consciousness. Some Pugs may require surgery to alleviate the breathing issues and prevent the fainting spells. 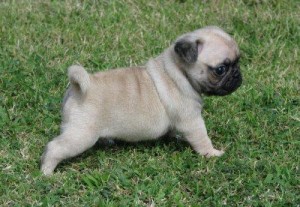 Pugs are prone to some very serious medical conditions. They can suffer from necrotizing meningoencephalitis (NME), also referred to as Pug dog encephalitis. This condition causes inflammation of the brain and meninges.  Dogs can suffer from seizures, depression, blindness, ataxia, and abnormal gait. Symptoms usually emerge between 6 months and 7 years of age. There is no treatment for this fatal condition and dogs usually die 3-6 months after onset of symptoms.

Another serious condition that the Pug is prone to is hemivertebrae.  Hemivertebrae is what causes the curled tail in some of these dogs’ breeds. It can occur in other spinal areas it can cause a wedge or the twisting or putting pressure on the spinal cord, which can result in paralysis.  Other symptoms that can occur include weakness in the back legs as well as fecal and urinary incontinence. Dogs with the condition can be treated successfully with anti-inflammatory medications or surgery. This health concern can be expensive to treat, especially if surgery is required.

The typical Pug weighs between 14-18 lbs. They have short hair and require minimal grooming. The average lifespan of the Pug is 11 years.

There has been some controversy and debate about the breeding of certain brachycephalic dog breeds due to their abundance of medical conditions. Many Pug rescues are against the breeding of Pugs and strongly believe that these medical conditions compromise their quality of life. Pug breeding is a difficult issue because the Pug’s docile personality and companion animal qualities make it a favorite for many clubs, breeders, and families. Pugs are a great example of one of the many ethical questions raised about dog breeds, should certain breeds become extinct?

One thought on “Pug”