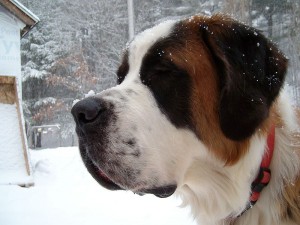 The Saint Bernard is basically a medieval sled-pulling dog, much like the Rottweiler descended from mastiff stock. It was used mostly in mountainous terrain. The breed is well known for their work in search and rescue in the Alps. When a traveler became lost, injured or missing a group of St. Bernard’s would be dispatched to search for them in the deep snows and passes between Switzerland and Italy.  When the individual was located one dog would lay beside them to lick them and keep them warm.  The other St. Bernard would return to the hospice and alert the dispatch for a rescue team. These canines occasionally do search and rescue work today, but most are bred as companion animals. The name St. Bernard derives from the Great St. Bernard Hospice, which is named after the St. Bernard Pass in the Western Alps. The breed, hospice, and the pass are all named after the monk Bernard of Methon. The earliest written mention of the St. Bernard is from 1707, but drawings with the dog date back even earlier.

St. Bernard’s can be loyal and affectionate companions if they are properly socialized from a young age. They often start out as rambunctious and clumsy puppies, but grow more docile as they mature. Puppies require a great deal of exercise, while adults often prefer to relax or sleep. St. Bernard’s love the snow and will enjoy romping around and playing in it. The older and inactive St. Bernard must get proper exercise to keep fit and healthy. 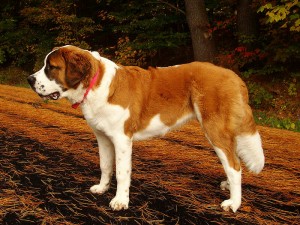 St. Bernard’s can be very difficult to train. They are stubborn and independent and only listen to commands when they choose to. They will often test boundaries and will try to get away with as much as they can. Owners must be firm and patient. They respond best to training involving rewards, such as treats. As they mature, they will often become more headstrong and difficult to control.

In recent years, due to popularity in the media and a higher demand for St. Bernards, breeders were not practicing discriminate breeding and the bloodlines became unpredictable. Some offspring began to display uneven temperaments and resultant behavior issues.  It is important to view and observe parents before selecting a St, Bernard puppy to looks for signs of aggression in the litter.

St. Bernard’s are generally a messy breed. They are known for making quite a mess when they are eating or drinking. They drool and shed constantly; leaving trails of drool and fur everywhere they go. They are not recommended for households that place high importance cleanliness.

They can be weary of strangers and may bark at them. They tend to do well with children, but they can easily harm small children accidentally with their size. They are not guard dogs, but their presence may be an excellent deterrent against intruders. 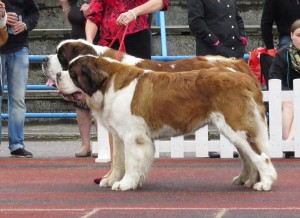 St. Bernards can have two types of coats. One is rough and longer in length while the other is shorter, smoother and dense. The longer coats of the St, Bernard require consistent brushing and do shed all year round. St. Bernard’s can often suffer from bone deterioration due to their fast growth, improper diet, and lack of exercise.  They often can suffer from hip dysplasia, elbow dysplasia, Osteosarcoma, entropion, ectropion, epilepsy, and heart conditions. Typically they weigh between 140-260 lbs and live from 7-10 years.

In North America from 1982-2015, St. Bernard’s have been responsible for 13 serious attacks on humans that resulted in 1 fatality. Caution should be exercised due to the size and strength of the breed.