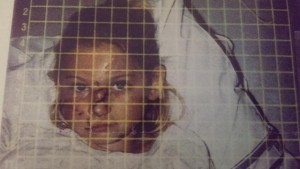 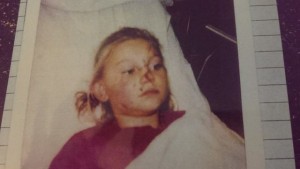 At the time my Aunt was living in an apartment like unit added onto my grandfather’s garage with its own entrance and back yard. Us grand-kids all knew that we were not allowed into her side of the yard and had to wait for her to answer the door before we could enter her apartment so that she could properly secure the dog. I had visited her many times in her apartment without incident, always knocking and waiting for her to secure the dog and open the door before entering.

One night, I was at my grandparents’ house to stay the night. I got bored and decided to go out and see my aunt. I knocked on the door like I always had and she told me to wait, so I did. She came to the door a few moments later, opening it just a crack and inquired as to what I needed, I didn’t have a chance to respond before the dog slipped past her legs, and for no reason at all jumped up and bit me in the face. My aunt and her boyfriend responded quickly and luckily the dog let go, but the damage was already done. I stood there in shock, not feeling any pain, just feeling the warmth of my blood dripping down my face. I didn’t want to touch anything so I simple cupped my hands under my chin trying to catch the dripping blood. My aunt and her boyfriend reacted very differently than I expected, instead of taking me inside the house for help, they picked up the dog, loaded him up in their car, told me to go inside and get my grandparents and then proceeded to get into the car and leave me standing in the garage bleeding. I found my way into the house and called for my grandparents. They called my parents while attempting to stop the bleeding and tried to minimize the damage by saying I ‘might’ need stitches.

Even at 9 I knew that I was in bad shape and that stitches were a guarantee. When my parents showed up they called 911 because for some reason my grandparents had avoided doing so. We lived in a very rural area and the nearest ER was 45 minutes away so rather than wait on an ambulance my parents loaded me up and took me to the hospital. I spent 3 hours in emergency surgery while a specialist attempted to piece my face back together. My nose had been completely sliced open, my lip was torn open and my cheek was nearly punctured through in multiple places. The hospital report called it a ‘partial facial de-gloving’.

After weeks of searching for my aunt and the dog, they were finally tracked down and the dog was at risk of being euthanized. My grandparents paid for an attorney for my aunt to help her save her dog. They made up a story about how I had come into her apartment even after she told me to wait, even though at the scene it was obvious from the blood stains on the cement that I was outside of the apartment at the time of the attack. We eventually succeeded in court and the dog was put down, but it was only the beginning for me. All the publicity from the case led to me being teased in school by kids who believed that pit bulls are wonderful nice dogs that wouldn’t hurt anyone unless provoked. They called me a murderer because the dog was put down, and constantly singled me out. I lost all my friends and my grades plummeted. I gained weight, stopped participating in all social activities and eventually became a completely different person. I couldn’t understand how people could blame me and treat me that way for having something terrible happen to me. I’ve been in therapy most of my life since I was attacked, I suffer from PTSD, depression and anxiety.

No matter how much my scars fade and no matter how much time passes, I can still remember it all like it was yesterday. I would give anything to have been in a terrible car accident, or a fire, or something where people don’t try to shift the blame, and downplay the danger. As though being attacked by the dog wasn’t bad enough without continuously being attacked by people who can’t accept that pit bulls are dangerous.