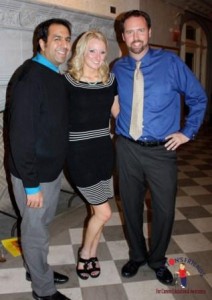 EAST TROY, Wis. —It’s taken a year for former babysitter Sue Iwicki to find the courage to share her story after her pit bulls mauled a toddler to death.

She’s now joined the family of Dax Borchardt for a new mission to keep his memory alive.

She was babysitting Jeff Borchardt’s son, Dax, like she did every day at her apartment in Walworth County.

After lunch, she let the dogs outside to go to the bathroom. When she called them in, without any warning, she said they snapped.

“I wasn’t able to keep Dax in my arms, and my immediate reaction was to cover Dax,” Iwicki said.

Iwicki said she tried everything to get the dogs off the toddler.

“I scratched at them, poked them in the eyes, fought with them,” Iwicki said.

But she couldn’t save Dax.

“They weren’t going to stop until they were done,” Iwicki said.

Iwicki told WISN 12 News reporter Christina Palladino that part of her healing has been to work with Borchardt on a foundation in his son’s honor called Daxton’s Friends.

The mission is to educate the public on all dog breeds before bringing them into the home.

“He only had 14 months to live. By starting this organization, he can live on forever. He will not have died in vain,” Borchardt said.

“I had to experience the absolute worst day of my life to learn a very hard lesson about breed ownership,” Iwicki said.

To move forward, Borchardt has forgiven Iwicki and doesn’t blame her for Dax’s death.

Now their lives are spent honoring his legacy.

“It’s given me a purpose, a cause to help save lives,” Borchardt said.

Authorities never issued criminal charges in Dax’s death. They said it was a terrible accident.

Iwicki had both her dogs put down immediately. She and her boyfriend got the dogs as puppies, and for three years, she said they never showed any aggression before attacking Dax.

The organization is also holding a benefit Thursday in Illinois: