A 5-year-old Kotzebue boy was found dead early Sunday after being mauled by a loose dog or dogs, the Kotzebue Police Department said.

Jordan Lee Reed had been playing in front of his family’s home on Saturday evening when he was reported missing to authorities at around 10:44 p.m., police said in a statement Sunday.

Kotzebue police, fire and search and rescue personnel searched for the boy through the night.

His body was found at 4:10 a.m. in an open field on the outskirts of Kotzebue, according to police.

“It is believed that he was killed by at least one loose dog,” police said. “The police department captured several loose dogs in the area, one of which was determined to have been involved in the mauling.”

Family members of Jordan Lee Reed reached by phone Sunday said the family had requested time to grieve in private.

Much is not yet known about the exact circumstances of the mauling. Police did not say what breed or breeds of dog killed Reed.

Kotzebue’s mayor said loose dogs have been an increasingly serious problem in the Northwest Arctic town of about 3,200.

Recently, the city council became so worried about aggressive dogs roaming the town that it tightened up an existing animal control ordinance, Mayor Nathan Kotch said in a phone interview.

Toughening the animal control ordinance was “priority No. 1” for the city council, the mayor said. People had been complaining that children weren’t safe while walking to and from school, he said.

Kotzebue has only one animal control officer, Kotch said.

“We were all dreading something like this happening. We talked about it when we passed the ordinance.”

Dogs can be seen roaming around town in groups of two or three, he said.

Some are escapees from mushers’ dog lots, he said. Others are pets whose owners aren’t watching them.

The revised ordinance, which Kotch said went into effect a couple of months ago, required people with dogs on a “vicious breeds” list to have insurance coverage for their animals. It also required such dogs to be penned in yards securely and levied stiff fines on people who failed to follow the rules.

The city tried to spread the word by putting the police chief on the radio to emphasize the importance of responsible dog ownership, Kotch said.

Kotch said he is horrified by the death and promises the city council will again take up the issue of dangerous dogs running loose.

“You can bet that’s the first thing we’re going to talk about,” he said. 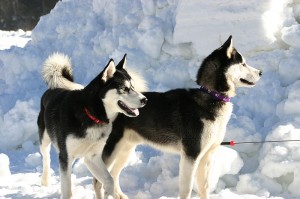 *Huskies are highly intelligent dogs and can do practically anything they put their mind to. Huskies have a strong “prey drive” and are generally are not recommended for families with small animals. They are skilled, patient hunters and are notorious for ending the lives of other house hold animals. Huskies can do well with older children if well socialized and trained to know that children are friends and mean good things happen. No matter how well socialized a Husky is, it remains dangerous around infants and toddlers in particular, seeming to perceive them as small non-human animals. Extreme caution should be taken with all interactions with children.
In North America, from 1982-2013, Huskies has been responsible for 79 attacks on humans, that resulted in 24 maimings and 25 fatalities.