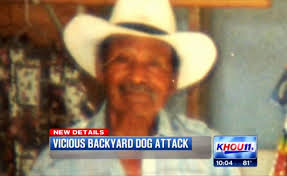 KATY, Texas – An elderly man was found dead in Katy Friday and it appears he was attacked by a group of dogs.

A grandson found the body of Juan Campos, 96, in his backyard in the 22300 block of Maplewood Drive.

“I called his name many, many times hoping that he would respond, that he would turn around and ask for help, but he didn’t,” said Miguel Velasquez.

The grandson said there were three “pit bull type” dogs near his grandfather’s body. The lower part of one of the man’s legs was missing and there were bite marks on his body.

A pet dog that belongs to the Campos family had also been killed.

Cy-Fair EMS and Harris County deputies responded to the scene.

At least two dogs were seized by animal control. Residents say at least one of the dogs belongs to a family that lived behind the victim. Evidence showed it clawed through a fence to get to the victim.

“There’s a wooden fence that surrounds the complaintant’s yard and there are holes in the fence where the slats have been broken,” said HCSO Sgt. Ben Beall.

Neighbors say Campos lived in the Katy Country Estates subdivision with his extended family for at least 20 years. He was home alone when he died.

Investigators haven’t ruled out the possibility that Mr. Campos died of natural causes and the dogs mauled him afterwards.

“He loved animals. He loved dogs—especially we had a couple that followed him around,” Velasquez said.

An autopsy will be performed to determine the exact cause of death.

“He was a very healthy man. We were not expecting this,” Velasquez said. “And you know, he was 96 years old. At this age, he was still walking. He was doing a lot of things around the house.”

If it’s determined the dogs killed him, their owner could face charges.

*The lovers of blood ‘sports’ turned to dogfighting to satisfy their fancy, breeding the large, mastiff-type bulldogs to smaller working terriers to get dogs both smaller and more agile, easier to keep and to hide, but just as willing to attack and fight to the death. With the rise of the kennel clubs and the desire to distinguish dogs by looks and pedigree as well as by performance, this ‘bull and terrier’ type eventually divided into many official breeds. They all share the same ancestry and function, distinguishing themselves mostly by slight differences in appearance.