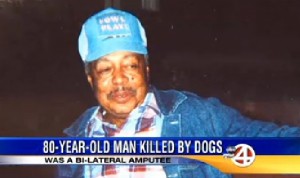 An amputee was killed by dogs in Harleyville, S.C., and WCIV shared the details on May 14. Carlton Freeman was attacked by a pack of pit bull dogs and dragged from his wheelchair, and now the coroner’s office has released details about the horrifying death.

Freeman, 80, was a bi-lateral amputee at the knees. It is said he tried to fight the dogs, but he was brutally attacked by a pack of dogs that have been roaming the neighborhood on-and-off for months. The incident happened on May 8, and Freeman died on May 12. The coroner says he had lacerations and bites “from his legs to the top of his head.” Family members saw Freeman attacked as he was riding his motorized wheelchair down the road. They tried to intervene as the pack of pit bulls tried to drag him into the woods, but they were unable to save him.

Animal control has captured three of the dogs, but there is a fourth they have yet to find. Neighbors were able to identify who they believed owns the dogs, and Barbara Goodwin said she does own three of them. The mother dog and two puppies were Goodwin’s, while the male dog was apparently not hers. The female and two puppies did have blood in their fur when taken by authorities. The male is hiding in the woods, and authorities have set up traps to try to capture it.

Authorities are still working on the case, and it is not yet clear if any charges will be filed. Apparently Carlton Freeman indicated before his death that he did not want to see anybody charged over the tragic incident. A service for the amputee killed by dogs will take place Saturday in Harleyville.

-The Dorchester County Sheriff’s announced today that no charges would be filed in the death of Carlton Freeman, a double amputee who died after being mauled by four dogs described as pit bulls