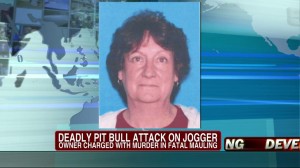 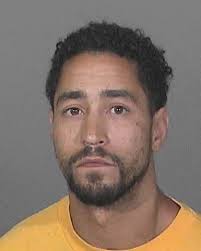 Pamela Devitt, 63-years old, was viciously mauled by four pit bulls while taking her morning walk. A passing motorist saw the woman on the ground being attacked and called 911. Authorities said her injuries included being “scalped” and one arm removed. The woman died en route to the hospital. Deputies began house-to-house ground and air searches to capture the dangerous dogs. County Supervisor Mike Antonovich offered a $25,000 reward for information leading to the “capture of the four killer pit bulls.” Detectives later received information that led to the service of a search warrant in a home near the site of the mauling. Authorities seized 8 dogs from the property — 6 were pit bulls. During the search, detectives uncovered a “marijuana grow” operation. Alex Jackson, 29-years old, was arrested on suspicion of cultivating marijuana. On May 29, after conducting DNA tests on the dogs, authorities charged Jackson with second-degree murder in connection to Devitt’s death. [source citations]

-Alex Jackson, owner of the four pit bulls that killed Pamela Devitt, was charged with murder Thursday after DNA tests on the dogs revealed the victim’s blood on their muzzles and coats

-Pictured: The female jogger mauled to death by pack of pit bulls in Los Angeles

*The American Pit Bull Terrier needs early socialization and training. Since they are active dogs, they can become unmanageable quickly. They need a firm and consistent handler that can maintain control at all times. They are eager to please and can learn tricks if trained patiently. They are very active both indoors and outdoors. Despite proper training and socialization, many dogs may be hard to manage and can still have unwanted behaviors. The American Pit Bull Terrier has a history and bloodline deep rooted in the blood sports of animal baiting and dogfighting. As with all breeds, they retain their original traits. They often to do not accept other animals, especially dogs, and can be extremely aggressive towards them. They may accept animals they are raised with, but have been known to kill other family pets even after years of living together happily.