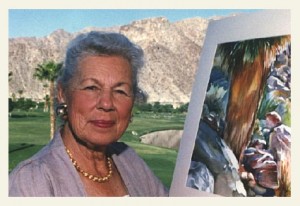 Elsie Grace, of Desert Hot Springs, was pronounced dead by paramedics who were sent to the Motel 6 in the 3900 block of West Florida Avenue about noon Friday, Hemet police Lt. Duane Wisehart said in a news release.

Grace was a nationally known water colorist who taught for many years at Copper Canyon College in Joshua Tree, said Karen Ellis, a Palm Springs consultant who said she knew Grace.

Wisehart said Grace had suffered a great deal of trauma to her body.

She had been in the motel room with her son and their two pit bull dogs, Wisehart said. Her injuries indicated that she was mauled and killed by both dogs, he said.

“Pending autopsy results, at this time it appears to be a horrific accident,” Wisehart said.

The dogs were removed and are being held by the Ramona Humane Society, which oversees animals control in the city.

“They don’t seem really aggressive,” said Jeff Sheppard, president and CEO of the Humane Society. “These are family pets.”

Sheppard said he did not know the specifics of the case, but it would not be unusual for pets to lick an owner who is unresponsive.

“An animal’s instinct is to try and wake them up,” he said.

It’s possible that the woman may have died before the animals attacked her, he said.

Grace was a member of the La Quinta Arts Association, where she last exhibited as part of the 2004 Art Under the Umbrellas program. She also belonged to other national water color associations, Ellis said.

An article published in the Hi-Desert Star newspaper in August 2004 said Grace taught at Copper Mountain College for 33 years. On her last day of teaching, her students threw a party and gave her a memory album, the paper reported.

Over the years, Grace taught oil painting and drawing classes, but said her true love was watercolor.

“When your brush touches the paper, you think you know what’s going to happen, but maybe your brush got too much water — whatever happens, it’s so exciting,” she said in the newspaper article.

After her retirement, Grace was commissioned by La Quinta Hotel and painted 230 watercolor views of the hotel’s casitas.

– Family members have created a memorial website for Elsie Grace who was found in a hotel room mauled to death by her son’s two pit bulls on February 8.

*The American Pit Bull Terrier has a history and bloodline deep rooted in the blood sports of animal baiting and dogfighting. As with all breeds, they retain their original traits. They often to do not accept other animals, especially dogs, and can be extremely aggressive towards them. They may accept animals they are raised with, but have been known to kill other family pets even after years of living together happily.