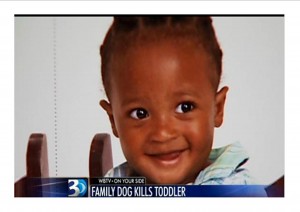 On May 5th, 2014, 1-year-old Nyhiem Wilfong was killed after being attacked by a chained Rottweiler in Caldwell County, according to the Caldwell County Sheriff’s Office.

Nyhiem’s grandfather, Ervin Patterson, was watching his grandson while his mother was job hunting.

Family members said he and his 5-year-old brother were playing at his grandfather’s house in the yard when the attack happened.

Animal control officers said the older brother suggested playing with the new dog, which was chained in the yard.

Family members said they have only had the dog, nicknamed Kobe, for three weeks.

They told Channel 9 they thought the boys were playing on a swing set when the attack happened.

Ervin Patterson said he was sleeping when he heard his 5-year-old grandson screaming about the attack.

“He said, ‘Papa, the dog is on the baby.’ So I jumped up off the bed and ran up there to get him. I called 911 and tried to do CPR but I couldn’t do nothing else for him,” said Patterson.

Investigators said the boy suffered serious injuries to his head and face.

Shirley Patterson, the boy’s great-grandmother, said the children went out to the swing set, so she assumed that is where they were playing.

The sheriff’s office said they will forward their investigation to the district attorney and let him decide on charges.

The dog was seized and is being held at animal control. Officers estimate the dog weighs 120 pounds.